I ran this at Con of the North, and since I had good luck with rerunning a game at last WisCon, I decided to do so again at WisCon 39.

I was a little worried about whether or not anyone would show up. The game was opposite the GoH speeches; I hadn’t heard any definite report of interest from the gaming department; and at the appointed start time, it was just me. Soon after, though, one player came in. And a couple folks had told me directly that they were interested. By about 15 minutes in, we had a great little group, and one or two people had asked if they could join in later on.

(As an aside, what’s the best method of running game sign-up at a con? If you assume everyone will be on any given electronic social media platform, you’re going to miss whoever’s not on that platform. Paper tickets such as Con of the North uses can encourage signing up for a million things you’re not actually going to be on, which can a) be discouraging for GMs when they think the game is going to be full and it turns out to actually not be, and b) make it hard for players to get into games they’re interested in, when the information about what’s available is unreliable. Paper sign-up forms can be discouraging, too; it’s always hard to be the first person to sign up for something, and they can fail in ways similar to paper tickets. There clearly seems to be no ideal method. As more and more cons have their own apps, and more and more of us rely on mobile devices, that may be the way to go. Still, complex in the meantime.)

We went over the usual info-dumping; I introduced Calteir and Blade & Crown. I tried to follow my rule of “meaningful player decisions within 30 minutes”, and I think we got there; they were describing how their PCs had contributed to the conflict against the Golden Kraken pretty soon after we started. I introduced the usual B&C mechanics, and how this particular scenario is an experiment in high-powered characters. I forgot to mention that the PCs might actually reach their (extremely powerful) fates as part of the adventure; this made it a little shocking to some of the players when, later in the game, their PCs indeed reached their fates. But hopefully the massive amount of player narrative control they had over those fates made up for the strangeness.

There was a bit of confusion about how to approach the first problem; they actually left the Tomb and were headed to a tavern to argue about what to do. But they eventually charged right in and did it just the right way, leading them to skip an entire section of combat. This meant that the real combat specialists ended up with not a lot to fight. There was a bit of combat in the game, in the form of a peasant rebellion, but it was handled narratively, not mechanically. That lack of combat isn’t really a rarity for B&C, where combat can be deadly, but it feels a bit unusual for this scenario. 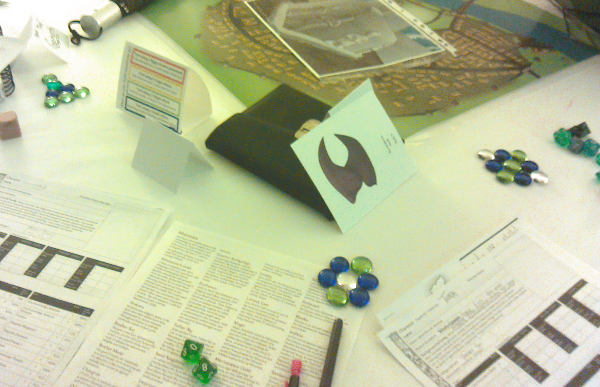 At the end, three of four PCs met their fates. The players gave it a lot of thought, and interestingly, they all chose very tragic ends for their characters. One player decided that their character was a really bad person and deserved a really bad end. The result was poetic and moving and totally appropriate.

The one PC who didn’t meet their fate ended up leading that peasant revolt, and using a Trait to narrate the results of the fight. It was also pretty amazing and had some great narrative inventiveness. The game actually ended before the appointed time, which almost never happens with games I run at cons. We even had time for the full post-game debrief, with the players telling me how things went and me filling them in on the questions they hadn’t gotten answered.

Overall, I think the experiment of Dooms has been pretty successful. The players have always come up with surprising, deserving ends for their characters, and have had a lot of fun playing these kinds of over-the-top characters. And one of the players turns out to be local to me; they were a great player, and I’d love it if we could do more gaming together in the future.

I plan to post some of the characters from Dooms here at some point; it’s always fun to see more examples of the kinds of PCs you can play in B&C. And hey, if you’d like me to publish Dooms, let me know!