This WisCon, I did a fair amount of actual gaming. Foremost among these, of course, was my Mountain Monastery Murder Mystery. As I’ve mentioned before, this is set in a monastery/abbey of Sister Earth, in my main campaign world, Calteir. The PCs are all Sisters of Faenwitha, headed to a major meeting where the Order will decide its stance on the upcoming succession crisis. The stakes are very high, and tensions are running just as high.

This is the first year of scheduled tabletop gaming at WisCon. There were three games, one each Friday, Saturday and Sunday nights. MMMM was Saturday night. There was a little confusion about when and how to get into the games. Some schedules had shown that they were to start at 8:30pm, while others showed 8:00pm. Also, it was a little unclear how players were supposed to register; my email address was given on the con website so people could tell me in advance (good), but it was also listed in the pocket program for people to tell me after the con had begun — when I no longer had access to my email (bad). And there was a sign-up sheet outside the room that I didn’t even know about until I got there. 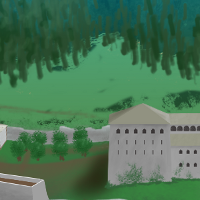 I mentally prepared myself for not enough people showing up and the game being canceled. Perhaps too much, as it turns out, because by 8:10 or so, four players had shown up. Cool! So in spite of some organizational hiccups, the game ended up happening.

I tried to make sure everyone had a chance or two to shine, and the players all did a good job of immersing themselves in the setting and the situation. They came up with some inventive takes on things. In the end, they averted disaster.

The players apparently all had a good time. One said she thought it was “awesome”. Cool again!

For a first year’s attempt at running tabletop gaming, I think it was fine. Hopefully some of the wrinkles will be ironed out for next year. In any case, I’m very happy to see RPGs on the schedule at WisCon.

In addition to MMMM, I played a few other games at WisCon. One was Telestrations, which is quite obviously someone’s attempt at monetizing Moneyduck (also known as EPYC). I still prefer Moneyduck, because it a) gives more space for writing and drawing, b) allows you to keep the game sheets for later, and c) doesn’t require anything more than paper and pencils. But Telestrations was fun, and a good icebreaker. I happened to play with one of the con chairs, whom I’d never interacted much socially before, for example.

There was also some Zar. I won, or lost. Dunno, really. Zar has become such a nice background social lubricant with folks I game with that I rarely note whether I’ve won or lost.

That same group also played another game I created, and I think there may have been more gaming that I’m forgetting.

One game I didn’t end up playing was Kobolds Ate My Baby. I’ve wanted to play this for a while, and it was being run by one of the players in MMMM, but at last, I decided to go to the Guest of Honor speeches instead. (This included Nora K. Jemisin’s extremely important call to arms — go read it if you haven’t.) WisCon is always about having to make hard choices between different amazing things.

More gaming could’ve been nice. I sorely missed my friend Lisa, for example, who usually wants to play Dominion and other board-and-card-games. (As it turns out, that same weekend, she was also playing that other game I created, about 150 miles away. But she couldn’t be at WisCon.) But the gaming at WisCon 38 was still pretty great.