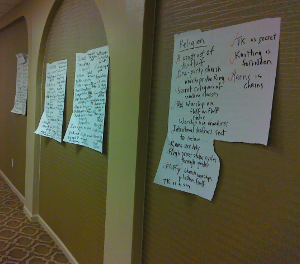 As you may have seen from my previous iterations of this activity/panel/audience participation exercise/thing, I have a lot of fun with it and have been pushing for more local cons to run it. I tried to get it on the schedule for WisCon 38 but didn’t succeed; I’ve run it a few times at Twin Cities cons in the meantime. I tried different phrasing for WisCon 39 and tried to carefully explain exactly what it is — not a panel, not a solo presentation, not a roundtable discussion, kind of not really even a game — for the programming folks. Doing all that helped get it onto the schedule this year.

Even then, it still almost didn’t happen. The way the schedule worked out, there was a session of Microscope at the same time as Build a World. Two cooperative group worldbuilding activities at the same time = major conflict. I was actually kind of hoping one or the other could get moved, but that would’ve caused too many programming conflict cascades. In the end, Microscope got canceled. I was sad that it worked out that way, but glad to get a chance to run Build a World.

It was Saturday night, and it was a huge amount of fun. In the end, we had about 20 people in the audience, and while it took a few minutes for everyone to understand what we were really doing, within a few minutes everyone was totally into it. I again used thumbs up/down/sideways, and even there, I sometimes just went with what seemed to be the general sentiment of the room. Previous iterations of this have gotten a little bogged down in me counting votes; this time I tried to keep the energy up by moving the votes quickly.

We ended up with a world where the people are fluffy, bioluminescent and telekinetic. There is ancient technology found in mysterious, ancient, decaying, fantastical, smoky ruins. There is a symbiotic form of fluff that attaches itself to people and destroys their innate telekinetic powers. Religion is a creation of the fluff, used to placate the masses and make sure they don’t realize their own TK abilities. But there is also a secret religion of the masses that may be fighting the popular religion. And corrupt police, planetary rings (in both the “big disc shape” sense and the “sound made by a bell” sense) and lots of mushrooms.

As in previous plays of this, the audience quickly went from “What are we doing?” to “Well, the fluffiness is obviously oppressing them by restricting their telekinetic abilities!” I love watching as we all become experts in this place that didn’t exist mere minutes prior.

A couple audience members separately suggested, towards the end, that we now needed to write a story about this world. I managed to address this, briefly but well, with one; I said that I’m actually kind of opposed to the notion that all worldbuilding must serve plot, and that I think worldbuilding can be fun on its own. I hope, and think, that this got at least one audience member to ponder why plot is given such importance. (Hint: “productivity”.)

Later on, one audience member praised my moderating as “fabulous”. It was humbling praise. The game/activity/event/thingy, whatever it was, was a huge amount of fun. I hope it keeps happening at WisCon.