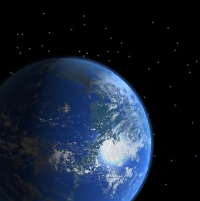 Discussion about where to start in building a world (for gaming or whatever else) often starts with the same question: top-down, or bottom-up? Do you start by detailing a little village, or by diving right into millennium-scale histories? There are very strong arguments for both modes, from “only work on what you’re going to use first” to “paint in broad strokes so you know the general lay of the land”. I think a lot of people dive into one or the other ends of the pool, often ending up with a great world, but almost as often ending up with a confusing morass that doesn’t accomplish what they really set out to.

Instead of either bottom-up or top-down, I’d like to advance the notion that there’s a better place to start: with your principles and purposes.

Too often, people forget to ask — or at least, just don’t ask out loud — what their purposes in building this world are. It it for a specific gaming group? For general gaming use in the future? For a novel? For a gaming group with an eye towards writing prose fiction in the future? For pure fun? Some combination of factors?

Quite often, people seem to rush into either the top-down view or the bottom-up view. Either of these approaches can lead you away from the reason you’re worldbuilding in the first place, and the kind of world you create should vary depending on what your reasons for building it are.

This example world is for a novel that you’re contracted to finish before August 1. You are the sole author, and you haven’t done much thinking about the worldbuilding yet, except a brief synopsis you sent to your agent. That synopsis implies a large dose of action and adventure, with good flavor but not necessarily a lot of consistency. Themes will be in line with the books you’ve already written.

Already, this implies a lot of requirements and freedoms for your worldbuilding:

A world of adventure

Our second scenario: You’re the GM for a group of friends who’ve been playing tabletop RPGs together for a long time. Last week, the group played Microscope and came up with a world that everyone really enjoyed. So much so that they’ve asked you to start a long-term campaign in this world.

The PCs will rise to become major power-brokers, and the players want to explore every corner of this fascinating world. You know that Sarah and Liz both want game worlds to hang together logically, while Mikah mostly just wants to kill stuff. They all prefer open-ended, player-driven games, and they want to start in a small part of the world where their PCs will grow in fame and status.

The players understand that you’ll put your own spin on things, and they trust your GMing, but they’re also enthused to play in this world you’ve all begun. You’re set to start GMing a few weeks from now, and everyone is hopeful that the campaign will go on for several years.

These factors imply a different set of worldbuilding requirements from the novel:

It might be useful to try and break down the elements of variation. Here’s what I can discern:

Like any kind of creation, it can be good to have your end product in mind before you start. (Even if your end product is “whatever I come up with today!”) I hope this helps you think through that a little better.