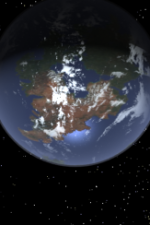 Every time I’ve been to WisCon, I think, I’ve been to the “Let’s Build a World” panel. In it, the panel and the audience build a very well-functioning and detailed world from first principles, all within an hour. (Those first principles might be “cephalopods are the dominant species”, “cats as money” or “floating islands”.) It’s always very entertaining, seeing where all the different requirements and assumptions lead. My favorite part is when, about 45 minutes in, everyone in the room realizes that we’ve created a pretty dang well-rounded world, complete with internal logic, mysteries, schisms, happy coincidences and bizarre yet believable ways of being. But almost every time, towards the end of the hour, someone will say, “Now we need some characters and a plot.” For me, that almost ruins it.

There’s an attitude that worldbuilding is only a worthwhile goal if it serves plot. I have heard this argument, or variants on it, so many times that I can’t even pin down all the examples. At Convergence 2012, a panelist in the “Maps & Literature” panel said, “Don’t waste brain space on things that you don’t need for the plot”, for example. At Minicon that same year, I was on the “Building a World with History” panel and some of my fellow panelists gave the warning not to descend too far into worldbuilding at the expense of plot, which caused me to give a mini-version of this rant that you’re reading. It’s common to get advice on RPG forums that the only worldbuilding a GM should do is what gets used in the game, and that anything more is pointless. A search for “too much worldbuilding” will turn up dozens of examples, most stating that there is such a thing as too much.

The argument seems to go that the only purpose of worldbuilding must be to serve plot (whether prose fiction, RPG adventures, or whatever). Any part of worldbuilding that doesn’t directly contribute to plot is wasted effort, and we can’t have any wasted effort. Anything that is fun in and of itself, without producing real work, is frivolous.

Now, I’ll admit that there is such a thing as too much worldbuilding. If you have a novel due to the publisher in two days and you’re still working out religious conflicts that occurred 300 years before your novel is set, that’s probably a time when worldbuilding should stop. If you’re in the middle of an RPG combat, you probably shouldn’t be detailing architectural styles for a country the PCs have never been near. There certainly are times and places for worldbuilding, and when you’re on a schedule, it’s something that has to be balanced against the other demands on your time. Like anything, there can be too much of a good thing with worldbuilding.

But too many people take the argument to the extreme, making the argument that a world cannot be enjoyable by itself, if it doesn’t get used in some form of plot (prose fiction, gaming or whatever). Some people in the “Let’s Build a World” panels at WisCon, for example, seemed to indicate that if there’s no plot, all the worldbuilding we’d done was pointless time-wasting. That it’s impossible, or worthy of ridicule, to enjoy worldbuilding on its own. This, in a panel explicitly about worldbuilding, and equally explicitly not requiring any particular plot to come out of it. The panels were supposed to be about the pure pleasure of worldbuilding, with no intention of making something that would even last beyond the panel, yet people still felt the need to assert the primacy of plot. And gamers often argue the same with RPGs, namely, that any time the GM spends on worldbuilding is only useful if the players benefit from it; any time beyond that is wasted effort, or worse, self-indulgent frippery.

In case it’s not obvious, I believe that worldbuilding in itself is worthy. If you enjoy worldbuilding, and there are no requirements that your worldbuilding serve plot any time soon, why not just enjoy it? There are, in fact, plenty of examples of very successful pure worldbuilding out there: Karen Wynn Fonstad’s books, SimCity, the Encyclopedia of Dune, the Dictionary of Imaginary Places and many more. Heck, most RPG setting materials count as pure exposition without plot, and as I will explore in later posts, I find reading setting materials to be fun in itself, even if you’re never going to use those materials directly in play. RPG setting materials sell well in part because people enjoy pure worldbuilding without plot. (The hard part is admitting that we enjoy it, and accepting that that’s okay. Again, that’s a topic for a later post.)

There is also no reason a created world has to be for the consumption of others. It’s perfectly fine to create a world that resides on your computer, or in piles of notebooks, or whatever, and never gets viewed by another person. If it’s fun for you, why not do it? As long as you aren’t sinking so much time and money into it that it’s hurting your life, there’s nothing wrong with it. Heck, if building a world just takes a bunch of notebooks and a library card, it can be one of the cheapest and most stimulating hobbies around!

There are lots of exceptions. If the goal of your worldbuilding is to make money, of course, then that’s different. If you need to come up with a publishable picture book, wiki, RPG manual or whatever, then it needs to be comprehensible and presentable. And if it serves a particular plot (novel, narrative computer game, etc.), then yes, it needs to bend to those needs. And, of course, if you don’t actually enjoy worldbuilding, there’s no reason to do more than the minimum required. And if it’s background to an RPG, then it needs to take a form that your players can get use out of.

How well you present your worldbuilding is naturally an important factor here. Too many GMs subject their players to vast tracts of boring prose; and page after page of exposition, while the protagonist is hanging from a cliff, can ruin any novel. There are good ways of presenting worldbuilding, and there are bad ways, that is certainly true; and good exposition is a skill that can be developed. And, naturally, your audience will come to it with their own prejudices, so it’s important to know what methods of exposition work for the people you’re presenting to.

But the real stumbling block, I think, is exposition for reasons that are wrong in the first place. Too often, GMs force their players to wrestle with paragraph after paragraph of narration that is not only bland, but wholly irrelevant to the PCs. This goes wrong in two ways, as I see it: a) the GM has guilt that, if they don’t jam all the material down the players’ throats, then their development effort has been a dissipatory waste; and b) the GM assuming that the players’ enjoyment of all this material will equal their own. It’s the GM equivalent of “let me show you my character”.

If, instead, GMs understood that a) it’s okay to have setting material that the players never encounter, and that b) it’s okay to enjoy the worldbuilding in and of itself, without having to tell all of it to the players, I think players would get exposed to a lot less unnecessary exposition. And we could all get a lot more guilt-free enjoyment out of worldbuilding.