A good illustration in an RPG session is worth, as the saying goes, a thousand words. I’ve mentioned before how useful the fictional nonfiction book Lebek has been in gaming; more than once, I’ve used it to give players a direct idea of what a multi-story medieval-esque house looks like. It’s been especially useful when I’ve run Tenement Defense. 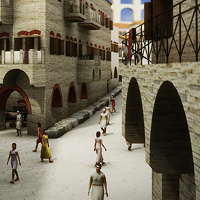 For these reasons, I was pretty delighted to discover the Rome Reborn project. In it, a group of archaeologists and historians have worked together with 3D artists to recreate the city of Rome, as it was in the year 320 CE, in beautiful CGI detail. When you see modern ruins, it’s all too easy to imagine that ancient Rome was a city of one-story buildings. It’s even easy to forget that everything had roofs. The Rome Reborn project’s gallery is a great collection of images of what must’ve been a fascinating city to walk around in. And get tired walking around in, especially if your tenement was on, say, the fifth story of a building.

Even more impressive are the videos. This one is a quick fly-through of the complete model; this one is the same video at a more leisurely pace with a running commentary about what we’re seeing. All very cool.

The quality of the 3D looks a little dated; the shadow rendering is pretty good, but it looks like they were working with a relatively small budget of polygons. Some of the surfaces look fairly repetitious, too. But still, it’s all very cool, and would make a great illustration for RPG purposes.

Okay, so, there’s a 3D version of ancient Rome. That made me wonder if there were similar projects for other ancient cities. How about, oh, I don’t know, 長安 Cháng’ān, capital city of the 唐 Táng and many other Chinese dynasties?

The National University of Singapore’s Department of Architecture has just such a project: A Digital Reconstruction of Tang Chang’an.

It’s pretty extensive, and pretty impressive. The gallery has a lot of great images, and apparently has some cool movies as well, though I couldn’t get them to function on my computer. The images are also not the richest in polygons, but they’re still quite clear and evocative.

Perhaps most interestingly, the project has a book associated with it. I’ve already ordered a copy, and look forward to having another resource for gaming based in Tang-dynasty China. This refuels my desire to do some sort of game based in the 魏 Wèi Dynasty, a century or so before the beginning of the Tang.

What other resources are out there? What digital reconstructions of ancient places do you know of?