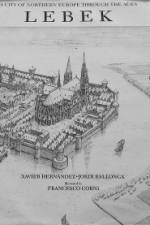 I don’t remember how I first came on this book, but I’m glad I did. Lebek: A City of Northern Europe Through the Ages is a wonderful reference for gaming purposes.

Lebek is not a real city, but it evolves like many cities of northern Europe have: from early Viking settlement, to small walled medieval town, to fortified renaissance port, to sprawling modern metropolis. Depending on what era your game is set in, the different eras could work as maps of your PCs’ home town, or an exotic location for them to visit.

Although (or perhaps because) it’s a kids’ book, the illustrations through the ages are simply wonderful. It seems heavily reminiscent to me of David Macaulay‘s books like Castle and City: short in page length, but full of incredibly intricate, clearly drawn pen illustrations that convey a wealth of information. Lebek particularly resembles Castle in that it has huge two-page spreads every few pages that show the same location — the center of Lebek — through the ages. Castle only shows the construction of one castle, though; Lebek shows the evolution of the city through thousands of years of history. Additional explanations and detailed rendering of particular items of note — a house here, a shipyard there, a factory there — breathe even more life into the various eras.

It’s easy to imagine a medieval-style campaign being based in one of Lebek’s eras. The bird’s-eye views can function both as evocative maps and intriguing guides to adventure; looking at any of the two-page spreads sets the eye wandering, and the mind wondering. 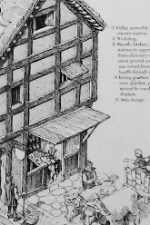 And an illustration of a medieval house has come in very handy for me in games; rather than having to describe what a medieval house looks like (vaulted cellar with exterior access below ground; shuttered shop front on the first/ground floor; steep stairs up to living quarters above; attic under thatched roof above), I’ve been able — several times now — to just show my players the book’s wonderful illustration and say “There. Like that.” The book has proven immensely valuable in play, multiple times.

I think I first found Lebek when I was looking for Macaulay books in a Half-Price bookstore. Lebek’s typography and format lend further credence to the impression that it is a Macaulay book; it’s easy to mistake the presentation for that of Castle, Pyramid or City. And yet Lebek isn’t a Macaulay book; the authors are Spanish, I believe, and the treatment of the subject matter isn’t the same as Macaulay’s. Lebek has a less whimsical, more expansive, more detailed feel.

There are three other books in the series: Barmi (a Mediterranean city), San Rafael (a Meso-American city) and Umm El Madayan (a North African city). I finally completed my collection earlier this week, finding Umm El Madayan at a Half-Price; that’s why it’s fresh in my mind now. That, and the fact that I used the house illustration again this past Sunday. I plan to write about the other three books eventually. For my purposes, though, Lebek has been the most useful of the group. I highly recommend getting it — or any of the series — if you have a chance.