This is a B&C adventure I’ve used a couple times with different groups as a one-shot, and it’s gone quite well. If you haven’t played in this adventure yet and might, you probably shouldn’t read below the divider!

The PCs are all residents of a tenement in a medium-sized town. They’re all pretty low in SC. In addition, some or all of them are engaged in illegal pursuits. The tenement owner, Sardia, has taught a lot of them what they know. The tenement’s residents are quite close-knit, looking out for and helping each other, much like a family. Make sure everyone knows the other PCs’ names and abilities to reflect this. Begin the adventure by having the players describe one way in which their character has helped one of the other PCs, and one way in which they’ve been helped by one of the other PCs. If time allows, have the players describe how long they’ve been in the tenement, why Sardia decided to let them stay there, and perhaps some of their other history with the place. 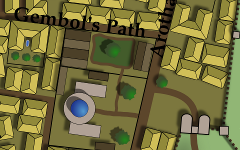 Next, ask what they’re doing on a typical day. Some of the players will inevitably describe being in a marketplace or on the street. Mention to them that, on the morning that the adventure begins, they see a rather heavily-armored woman who carries herself like a soldier: mercenary, knight or adventurer, they can’t be sure. (She may be heavily armed as well, though they can’t see well enough to be sure.) She is asking one of the merchants nearby if they’ve ever heard of a tenement in which dwell X and Y — X and Y being the names of two other residents of the tenement. This should pique the PCs interest, and they will proabably begin to follow or investigate the woman.

Given some work (Sneaking rolls, Streetwise, some good roleplaying, etc.), the PCs may discover some facts about the woman:

Chenin and Gorvol are adventurers. They’ve got a treasure map, and it contains clues that seem to point to a tenement in this town. They’ve already gone to one tenement and determined that it wasn’t the one they wanted. The PCs’ tenement is the next on their list.

Chenin is the brains of the outfit; Gorvol is adept in mystical skills (he knows Spirit Magic, Air Magic and Fire Magic to at least level 2, and knows several other magical skills), but he isn’t really guiding their little expedition. Chenin is the one who’s driven to find the treasure, and she’s the one interpreting the clues. She’s quite adept in social skills, while Gorvol isn’t. She’s also very good at fighting. She has Gorvol along because he’s good with a falchion and because she suspects the treasure may have mystical properties.

They’re interested in acquiring the treasure, first of all. They might be willing to talk to the PCs, though they are very wary of tipping off the residents to the existence of the treasure.

Chenin is not above hiring local thieves or assassins to break into the PCs’ tenement, if she thinks she can do it without alerting the residents. She has thought of trying to buy the tenement outright, but a) she is certain this will seem suspicious and probably show her hand, and b) she doesn’t have enough funds to do so anyway.

The PCs will hopefully try to gather more information about Chenin and Gorvol, and may even confront them about why exactly they’re looking for the tenement. Chenin and Gorvol will be cagey; they know better than to spill the beans. But Gorvol is not as sly as Chenin, and he might be conned into letting too much information go. They are both quite bloody-minded and willing to spill blood if it will mean them getting closer to the promised treasure.

If the PCs start asking for money to give Chenin and Gorvol access, they will become wary; the more the PCs ask for, the more desperate Chenin (and to a lesser extent Gorvol) will become. Even if the PCs seem to be making a genuine offer, Chenin will never believe them. Gorvol might be convinced, though he’ll find it impossible to convince Chenin as well. And if the PCs ask for larger sums, this will only cement in Chenin’s mind that their tenement is where the treasure is, and that she needs to act that much faster to get it before anyone else does.

If the PCs get Chenin’s map, they will see that several signs do seem to point to their tenement: the map describes a building near [landmark that their tenement is near], with stones that have ancient runes of [description that matches the builder’s marks of their cellar’s stones] in the cellar, etc.

As the PCs accelerate, so will Chenin and Gorvol, at least if the PCs allow them any way to find out about it. If the PCs get too wise to Chenin’s plans, she may try to kill them; if the PCs try to reinforce their tenement, Chenin may hire goons to help her; if the PCs appear to know that the treasure is in the cellar, Chenin will move up her plans to secure the treasure, probably by sneaking and breaking in under cover of night.

If the PCs don’t act fast enough, Chenin and Gorvol will still move to get the hoard. She will believe that it is in the cellar, which is accessible from the street. Remember that Chenin definitely has a plan that she will make progress on if the PCs don’t stop it.

Both times I’ve run this, it ended up with a fight involving the interlopers trying to get into the tenement and the tenement-dwellers trying to prevent them from getting in. Eventually, though, the PCs may end up victorious: they’ve defeated Chenin and Gorvol, and now they can find the treasure… right?

So what, exactly, is the treasure? This can go a lot of different ways, and where GM judgment is especially called for. What happens from here will decide a lot of what the adventure ‘means’ for your group. I can see a lot of different possibilities, and I’ve run a couple of them now:

If you run this as a one-shot and your players are okay with it, you can have the scenario result in very elaborate and expansive consequences. You can certainly ask the players what the consequences of finding vast wealth would be for their characters. And regardless of how you run this adventure, when you do, please let me know how it goes!

As may be obvious, this adventure is kind of a ‘dungeon delve in reverse’, where the PCs are not the ones doing the delving but the ones who must defend their home against intruders. It can be interesting to use this adventure to explore and contrast ways in which most dungeon delves are based on an assumption of amorality; it can also, perhaps paradoxically, just be a good one-shot with not a lot of consequences for the larger campaign.

I originally designed this adventure as a sort of prologue to Karna’s Cache, partially to see what the residents of such a tenement would do, but also just to see the situation from the other side.