Spell effects in Blade & Crown are intentionally unquantified. As I’ve said before, I like to keep magic mysterious, powerful and rare, and I think keeping it unquantified helps preserve mystery. Once you know that a fireball will emit 0.015625m3 of 871° flames at 18m/s, it’s become less magic and more engineering. And that is not a flavor of magic I prefer in my fantasy games. 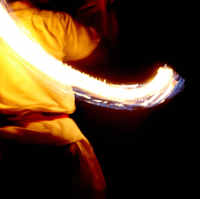 However, the spells still have defined effects: “allows the caster to fly for a short while”, or “causes someone to become as strong as a bull”, for example. What if we want to take it further?

It’s entirely possible in B&C to dispense with ‘spells’ altogether and go to free-form magic. In this method, a mage can make a spell do anything they want, within two limits:

Nodes should still be limited by element. A fire node could be used to power a spell of immolation, sparking, creation, etc., but not cold, logic, insight, etc. Check the table of correspondences on page 107 (may vary by edition) for ideas here.

Similarly, higher-magnitude nodes should be more powerful than lower-magnitude ones, and that’s just as it should be. The spell effects table on or about page 137 should come in very handy here.

What does this do the process of aligning? Not much, really! Mages will still need to align each node to bring themselves into harmony with it. The only difference here is that no spell need be declared at the time of aligning.

One potentially thorny aspect of this system is that it implies more negotiation between player and GM over spell effects. In the standard system, discussion about what magnitude a given spell is only happens only when the player assigns the node in the first place — or, if they use a widely known spell, not at all. There can be discussion when their mage casts the spell, but it’s usually minimal. Does free-form magic imply lengthier and deeper negotiation than would otherwise exist?

Not necessarily. There’s already a bit of negotiation implied in using Traits, and that’s rarely onerous, even here in the land of Minnesota Indirectness Nice. And giving this kind of narrative control over to the players already implies a good amount of trust between GM and players, so negotiating over spell effects on a more frequent basis should hopefully be only a bit more negotiation than was already occurring.

I’m thinking about trying free-form magic with my monthly B&C group. How about you? How could this work with your game?