As I alluded in the comments to my last post, this is my third purchase: a very cheap bag of green glass beads. The beads in this particular bag are a good size for gaming, about 20mm in diameter. 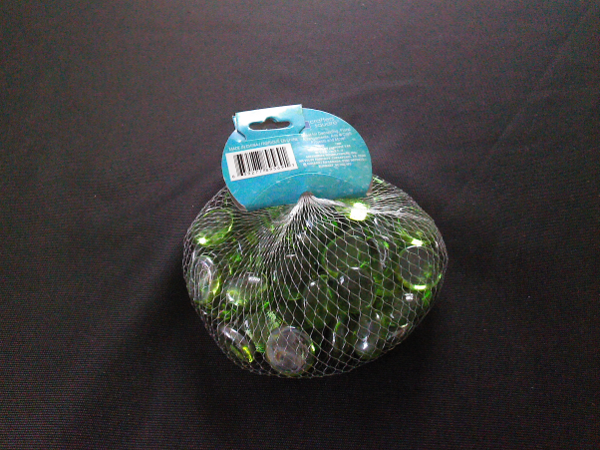 There are lots of uses for glass beads in gaming, of course. Many games require tokens like these as a way to track fate points, luck points, bennies or something else. They would work pretty well as stance markers in Blade & Crown, too, though you’d need to buy multiple colors for the multiple stances (implying perhaps $6 including tax for a full set). They can work as miniatures when you need quick disposable NPCs. When I run Blade & Crown, I use glass beads to track Traits. Their shiny beauty somehow evokes the ways in which Traits make B&C characters unique. (But hopefully doesn’t make players want to keep the tokens just so they can admire them.)

There are lots of places to buy glass beads like these. They’re available in many gaming stores, for example. Chessex, as a more specific example, sells glass beads in different quantities and packaging that amount to about $0.08-0.09 per bead. Surplus stores sell glass beads more cheaply, perhaps $4.50 per pound. That works out to about $0.05 per bead, with the added bonus that you can mix and match colors. An even cheaper source is the gardening section of the average craft store. (The beads are sold in the planting & gardening section, often as “vase gems”, “container filler”, “glass rocks” or something of that sort. Asking for “beads” will just cause confusion, because that implies pierced beads for jewelry-making.) JoAnn Fabrics, for example, sells a 3lb. bag for $7. That works out to approximately $0.03 per bead. However, these dollar store beads are by far the cheapest of the bunch. There are 72 beads (and one chip) in that bag, which weighs 14oz. That works out to about $0.014 per bead — only about 1¢ each!

The choice of colors isn’t as good as at a surplus store or a craft store, it’s true. And they don’t come with inspiring names like some beads sold specifically for gaming do. But at slightly over 1¢ a piece, they’re pretty irresistible nonetheless.