The Thursday night group recently wrapped up play-testing a game that includes divination as a major PC ability, so I’ve been thinking more lately about prognostication (fortune-telling, foreknowledge, etc.) in RPGs.

As I see it, divination tends to move towards one of two extremes:

As I said in Blade & Crown:

Actual foreknowledge of game events can be very difficult to implement. Forcibly designating the future of events in-game can make it feel like the characters are railroaded; divination that’s flexible enough to allow for real free will may be too wishy-washy to be satisfactory.

Thus, divination can fail in either of two different directions, Importantly, I think either extreme is easy to fall into. Just a bit of sense that the future is written in stone, or a bit of a sense that a character’s cool ability is actually just lukewarm, can be enough to sour the game and make a player feel powerless.

Games are fundamentally, for me, about making important choices. Put another way, games are about the ability to change the outcome of events, and the ability to not be subject to the usual rules of the mundane world. Divination and foreknowledge mess with that formula, quite easily resulting in a loss of player choice, and of player agency.

Of course, if you’re looking for a game that’s railroady, or where the GM is largely revealing a pre-determined story, this is more of a feature than a bug. And if you’re writing a piece of prose fiction, it’s entirely fine for events to be pre-determined — since they are, assuming you’ve already written the whole piece before the reader interacts with it. But this is almost never the kind of game I want, however. 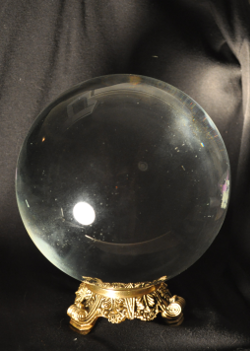 Naturally, I like the way Blade & Crown does it. In B&C, a foretold future event creates a narrative ‘pull’ on events, but doesn’t lock characters into doing a particular thing. Seems like games that use similar methods of player narrative control (Traits, Aspects, etc.) should be able to implement similar forms of narrative pull. We tried something similar for the game we’re playtesting, and it worked fairly well. (‘Fairly’, because I still felt that tension between falling into utter foreknowledge and complete uselessness. And it felt vaguely unfair that I got to declare the future and no one else did, even though the declarations were wobbly and not especially reliable.)

This kind of narrative gravity is an aspect of RPGs that interests me a lot. Next year’s Con of the North scenario, The Dooms that Came to Chaegrae, is in many ways an experiment to see how well this can work. In that game, the PCs will all have strong senses of their fates — their Dooms, that is — that will drive them towards heroic deeds, and probably both into and out of danger.

It’s important to note here that I’m talking specifically about prognostication — foretelling the future. If, instead, a character’s abilities/fate/spirit leads them towards knowledge of the past, that’s completely fine in an RPG. Indeed, a large part of many RPGs is trying to figure out what has gone before. We call this ‘investigation’ or ‘mystery’.

And this mirrors how we feel about real life. (Well, most of us, anyway.) We all have a sense that the past is written in stone, because it effectively is; none of us can change the past. But prognostication can make the future seem inevitable, and reduce our sense of free will. Divination about the past, on the other hand, is what we all have already: memory. None of us have free will about the past, because we can’t change it. (And perhaps we can’t change the future, either; but most of us like to at least operate under the assumption that we can.) So divination about the past is something that already happens in RPGs. We usually just call it investigation, or exposition.

I’m sure there are other ways of handling foreknowledge in RPGs, but I’m not thinking of them. Do you have ideas for ways that prognostication can be included in an RPG without reducing player agency? I’d love to hear them.