My second game of the night, and the first one where I was playing rather than GMing. This was pretty loose and free, with character generation incorporated into the beginning of the session and (apparently) the adventure taking direct inspiration from our characters. Did John create the adventure on the fly? Or was he just doing a good job of incorporating our characters into a pre-existing adventure? I couldn’t tell, which says many good things about John’s GMing. 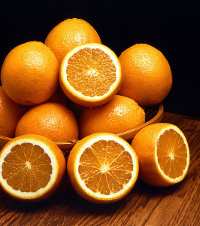 John charged us with devising a few elements: Our pirate vessel’s cargo; who our captain was; etc. The cargo we came up with: oranges. Lots and lots of oranges. This naturally became a running gag.

For the captain, the other players suggested a princess. This started heading towards “damsel in distress” territory, possibly working its way into full-on annoying sexist tropes. I suggested that we suspect she’s a princess, but unsure; most of the time, she seems just as rough and ready as the rest of the crew. Luckily, the rest of the group accepted that (partially with John’s encouragement).

The scenario still involved rescuing the captain, which involved doing a favor for the head bribe-taker-in-residence at the port stronghold. Again, I couldn’t tell if John hoped we’d offer to do the guy a favor in exchange for our captain’s freedom, or if he was just improvising. It all felt very smoothly plotted.

In the end, we had to break into a fortified ziggurat-like ship in the harbor, home to a number of four-faced creatures with bad tempers. (These were actually ahoggyá, though none of our characters knew this.) There was hemming and hawing about what method to use, but we got into the ship and eventually blew it up. One player (who, if memory serves, had played in one of my games last year) revealed that he’d set some explosives to blow the ship up, and they did.

The highlight of the game was one player’s roleplaying as a half-troll. He basically evoked the main character from Sling Blade, and did it hilariously. “You oughtn’t shoulda hit people with that club of your’n”, “That weren’t nice”, etc. etc. I should’ve written down some actual quotes, but I think I was too busy laughing.

All in all, a very enjoyable game that fit well into its two-hour time slot.