Friday night, I decided to return home right after John’s game. I had a cold brewing, and I was also really tired from a week of work and prep. So my next game was Saturday morning: Lost Voyages of Sindbad. It mixed WWII-era pulp with wǔxiá-style action. (There wasn’t really much at all related to the usual conception of Sindbad, but the description made that clear before play.) 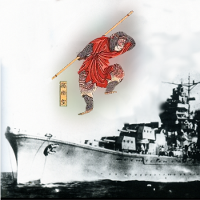 This game was an interesting experiment, in that it blended two timelines: one set in about 1937, during the Chinese War of Resistance Against Japan; the other, during the Míng Dynasty. The PCs were divided into two different groups: those primarily from the modern era, and those from the older era. Play switched back and forth between the two eras. Each of us played two characters: our primary PC, based in one era; and a secondary PC, based in the other era. I ended up playing a Chinese resistance fighter in the modern era, and a monkey based on Sūn Wùkōng in the ancient era.

The action centered on an island near China that was home to some immensely powerful mystical energies. The genre was, again, pretty pulp-y, so there were Z-Rays and robotic dragons and other gonzo elements floating around. Specific elements I remember: a battle at sea between several Míng-era treasure ships and a WWII-era Japanese warship; sneaking onto a jungle island; and eventually blowing up the Ultimate Power Source. It was quite thoroughly pulp in flavor.

I really liked how the two time-streams ended up getting integrated. Our secondary PCs were effectively disposable, and some of them died during the course of the game, which allowed for more dramatic tension than a lot of games have. And our PCs all had dreams of being the other PCs — the modern characters dreaming they were on a Míng Dynasty treasure ship, and the ancient characters dreaming they were on a strange, metal-hulled ship with no sails. It was a nifty experiment for a game.

On the negative side, there were also some severely transphobic elements towards the beginning of the session that nearly caused me to leave. I kept asking myself “Should I say something? Should I excuse myself? Will it get any better?” Luckily, it did get better and I managed to stay through the session. Still, it was a marked contrast to the attitudes present in my afternoon game. I’ve emailed the GM of this game; hopefully, it’ll prevent such problems in the future.