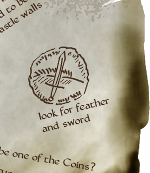 This was the first game that I ran at Con of the North 2013. I used Blade & Crown, as I so often do these days. The scenario concerned a group of thieves living in a tenement together who discover a map leading to a possibly-grand treasure.

The game was full — all five slots were taken, and I had to turn away a couple people with alternate tickets. It’s always tempting to let in more people, but I find that adding players inevitably decreases the amount of important action each can take. I think I had presence of mind to recommend that they try my next game, also using B&C, but anyway, I kept the number of players capped strictly at five. (This all contrasts with the first time I tried to run this scenario, when only one player showed up. I’m pretty convinced this is entirely due to the time slot — before, I was running the game Sunday night, I think it was, but this time I was running it Saturday afternoon.)

I didn’t take many notes during this game. I usually take some form of notes when I’m playing or GMing, because otherwise my memory of what’s gone on gets exceedingly dim later on. But because this was a con game, and because I was GMing, I let note-taking fall to the wayside.

I probably did the sequence of explanation wrong — I explained the mechanics before the players had character sheets in hand. But my overall goal of getting the GM expositing done quickly was successful; I think the players were making meaningful in-character decisions by about 25 minutes into the game.

The scenario was, I admit, pretty railroady. Once they were on the track of finding the treasure, it was basically a straight sequence without much room for side adventures or alternate paths. Railroady games are, I think, pretty appropriate for a con, especially one with only four hours to play. With time pressures on, you have to keep cracking that whip and moving the PCs towards the climax.

But there were still a few problems with no set resolution, and there were good opportunities for player interaction and character action. They had varying ideas of how to proceed to the town the treasure was apparently located in, and once they got there, they even split the group briefly to explore paths to the spot marked with the big figurative X. All the characters contributed something meaningful to the final acquisition, I think: the fallen cleric forged a document, the pickpocket did some important scouting into a cellar, the ex-mercenary engaged in a bit of combat with a ghost, etc.

Speaking of combat, the game proceeded almost entirely without it. When melee finally did happen, I kept it highly streamlined, and in fact didn’t even tell the players what calculations I was making. I hope this didn’t detract from their fun or sense of GM fairness. And I hope the players weren’t expecting a combat-heavy game; I seem incapable of running such games, even when I try.

In fact, the game seemed to have a lot of talking. There was a lot of planning, discussing what questions to ask, plotting out how to do things… without actually doing them. I think this may have been due to the combination of players involved, and also due to the semi-gritty nature of B&C; it seems to encourage players to plot everything out before making a move. Or maybe it’s just the kinds of adventures I run. I got a little frustrated that they didn’t take action more quickly, and at a couple points, I asked what they were trying to accomplish and elided the intervening stuff with a couple die rolls.

Also, I should’ve allowed time for an epilogue. I set all the PCs up as having big plans for the treasure that they found, and I should’ve given the players time to describe what they did with the treasure.

As I mentioned, though, all the PCs got to accomplish something important, and there was some very good roleplaying. There was a good level of joking, adventure and tension in the room. There were some good quotes (that I didn’t manage to preserve, as I wasn’t taking notes). One player bought a copy of B&C, and later gave me quite a nice review on RPGnet. So, overall, I think the players had fun.