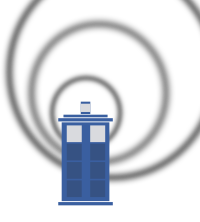 I was just reading over my notes about time travel and RPGs. I mentioned towards the end that a game where players could go back and change the events that had happened would probably require some sort of publicly-visible chronology, front and center, usable by the players. And the game that comes to mind when I think of this is Microscope.

As I think about this again, it seems like Microscope could very readily do a Doctor Who-style game, with time travel and different incarnations and whatnot.

For example, the palette could easily be used to describe the limits of time travel in this game. Can this Timelord (or this regeneration of this Timelord) fall in love? Is this TARDIS made of dwarfstar metal or wood? Will there be companions who can operate the TARDIS or not? Who will be the big baddies for this timestream? Are they redeemable?

Even more than this, the default Microscope method of play — where different players decide who will take which pivotal role in given events — meshes wonderfully with the Doctor Who system of incarnations. No real need to worry that this particular Timelord is being played inconsistently, because if Angela plays the Timelord during this event as a giving, loving, bashful person, but Brenda plays the Timelord as a harsh, efficient technocrat, it’s easy to explain the difference in styles as the result of a regeneration. And that clearly calls for a scene later on to find out how the regeneration happened!

There would need to be a system for keeping track of paradoxes or changes in the time-stream. Perhaps adding a third dimension? If you stack an event on top of another one, that is then the new way that event played out — and all events deriving from it are then placed in paradox.

Perhaps one night’s session could follow some thematic element, such as The History of the Daleks. Or it could just be one regeneration in the Timelord’s life. Or it could span multiple regenerations. There would be a built-in timer: once your Timelord has achieved 13 regenerations, you know this timestream is complete.

Maybe this is just a passing brainstorm, but the idea seems very workable. I may have to pursue this further.

Apologies again for not posting in such a long time. Life has continued to have me extremely busy, and now Con of the North is a mere week and a half away, and I have a lot of prep to do. Posts may be sparse until after CotN.