Last time, I mentioned the two poles of time travel theory: one, that the past is inelastic, and any change you make will always find a way to reset itself somehow; and two, that any change you make will have immense, perhaps disastrous, consequences by creating a different future. Really, though, there’s a third pole, at least in science fiction portrayals of time travel: that time travel is an excuse to go to any place in the universe and have wild adventures. 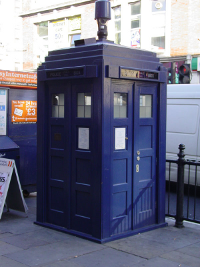 In RPGs, the only time travel-centric games I’ve played have been Doctor Who — first the FASA version, then the Cubicle 7 version. (I own, but have never played, the 1991 version called Time Lord.) They’ve all skewed pretty close to that third pole: the time travel was really just a piece of background, a framing story to excuse wild worldbuilding and gonzo adventures. In either gaming or TV, the Doctor almost never uses time travel to fix things, probably for the meta-reason that doing so would make everything easy and end every story almost as soon as it begins. It’s mostly “Oh, we’re on Proxicofabulon VII, the planet of flying whales! You’re never going to believe how people get to Sunday brunch here…”

This, and reading “Vincent Van Gogh”, has me thinking about how time travel works in fiction, and in gaming. Prose fiction allows the actual time travel to be front and center in the plot; the narrative can loop and repeat itself, as needed, with relative ease. (It can. Doesn’t mean it always does; a fair amount of time travel fiction hews close to that third pole, too.) As long as there’s an author who has a clear vision for the whole complex knot of time travel, we the readers (or viewers) can be transported back and forth through it, hopefully with relative clarity. It can be pretty hard to make time travel make sense, of course. In one sense, any time travel at all would create paradoxes; and in another, our minds just aren’t built very well to understand time that doesn’t flow linearly. And I think that’s a big part of why so many supposed time travel-centric stories haven’t actually used time travel as a major part of the plot. But with a clear conception, and clear presentation, we can make some sense of it.

The way time travel works (or can work) in prose fiction has me wondering: is it possible to have an RPG where time travel is actually a major part of the game? Where rather than just (figuratively speaking) getting the characters to the front door of the dungeon, the time travel is the whole adventure itself? Where the plots hinges on the ability to travel back and forth through time?

I think this would be rather difficult, given some of the fundamental characteristics of RPGs: namely, that we play them through time, synchronously, making things up as they are are happening. An RPG is all about creating a story together, as we follow the arrow of time together. To allow for going back and changing the way things happened — well, that would seemingly either be messing with a big part of the magic of RPGs, or simply impossible.

And it really would be a practical difficulty, even if we decided we wanted to try. A huge part of tabletop RPG play involves spur-of-the-moment improvisation. How would one even begin to record the history of a game session and then go back and modify it? I’m reminded of the “Forward Reverse” game from Whose Line Is It Anyway?, where the actors have to go back through a scene they’ve just improvised and reenact what they’ve done. It looks incredibly hard, and it’s not actually all that entertaining considering the effort involved.

There’s another form of interactive entertainment that can also deal pretty well with time travel: Choose Your Own Adventure-style books. In these, it’s very possible to go through the time stream in multiple ways, making different choices as we go experience the story. In fact, the meta-experience of reading through a CYOA and choosing different paths than you did on a previous read (“well, what if I didn’t pick up that rock in the Cave of Time?”) is very much like traveling through time and changing the way history had previously played out. But of course CYOAs don’t allow for the infinite variability that RPGs do, and there’s still a sole author who charts everything out in advance, so I think the parallel isn’t actually all that informative. Similarly, the card game Chrononauts allows for changing the time stream and can track paradoxes that those changes create, but it only allows changes within a pre-determined time stream (and only binary changes at that).

I know of one pre-existing RPG that tries to put time travel relatively toward the forefront: Epidiah Ravachol’s Time & Temp. It includes pretty extensive rules for revisiting the same moment in time, and for the paradoxes that may crop up from messing with the time stream. However, I have to admit that I don’t really understand how it works, in spite of watching a video of Epidiah explaining it. It looks fun, though it looks to be concerned with satirizing paperwork-filled office work as much as it’s concerned with time travel.

What I’m envisioning is a different sort of time travel game, one where time travel is an integral part of play but which isn’t about satirizing paperwork. This game would probably require some sort of explicit staging of scenes, in order, such that one would depend on another, and such that changing one detail could end up changing details in later scenes. Perhaps using note cards to note the time stream, and listing important consequences of each scene.

This may sound familiar to some of you; what I’m envisioning is basically a sort of Microscope game, where players can set out a timeline. But unlike Microscope, the players can then go back and change things. (In this game, it would be possible to un-nuke Atlantis.)

Would it require video recordings of previous play sessions? Some mechanic by which players receive luck points for using lines they’d used before? There would certainly be a need for some kind of paradox tokens, which could allow false memories, jumping between one timeline and another, or completely destroying the universe. Perhaps these tokens would be based on the number of previous scenes that a given change affects, or how far it causes a branch to shift, or the number of characters present in the scene, or some other set of factors.

It would also be good to use the Microscope concept of the palette to chart out how time travel works in this particular iteration. Many worlds, or inflexible time-stream, or something else? How does one undo a glitch in the time-stream? Is it possible to meet oneself in the past? Does meeting yourself in the past cause you to explode? Perhaps a list of questions would help in composing the palette, or maybe it should just be left open-ended for the players to decide. These could all affect how paradox tokens are generated.

Are there already time travel RPGs that do this? Like I said, I’ve really only played Doctor Who-based time travel RPGs, and those tend not to put time travel front and center. Maybe this is a frontier that’s already well explored. Or maybe someone from the future came back and erased all trace of the games that did it perfectly, lest we unlock secrets we were not meant to know?