This is, I think, the Dollar Store Dungeons purchase I’m least certain to use in a game, but so cool I couldn’t pass it up: 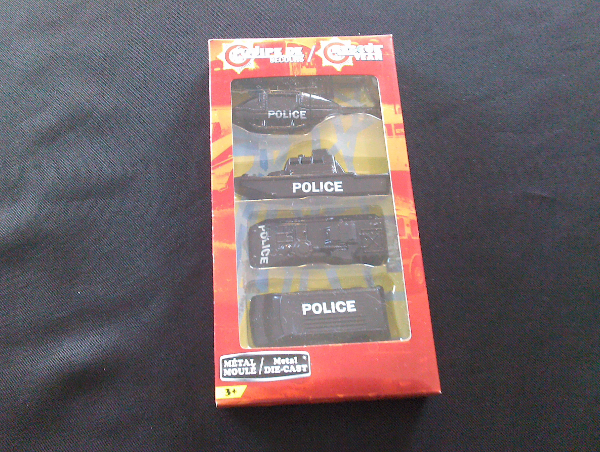 Four die-cast vehicles: a helicopter, a patrol boat, a van and an APC. Not especially enamored with the “POLICE” written over each one, but the single pieces are pretty cool. It makes me want to play Car Wars again. (Well, almost.) Anyway… the vehicles are not to scale with 25mm figures, but they are to scale with other die-cast vehicles.

The best thing about the whole set is the APC. It has four wheels; they’re a bit undersized compared to the vehicle itself, and the undercarriage totally doesn’t look like an APC’s does. However, the small wheels almost give the APC a sense of floating — it could easily work as a hovertank or starship. In fact, it looks more than a little like Jesse DeGraff’s interpretation of a Traveller SDB. Not only that, but as I discovered after getting it out of the package, the turret rotates! 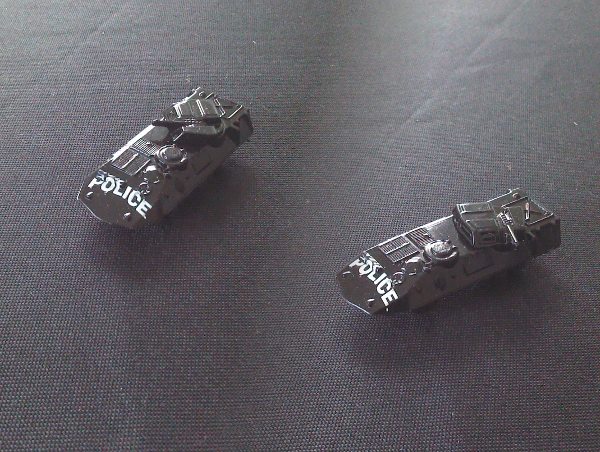 I’ve had games where an APC like this would’ve been handy as a mini, even just for giving a general sense of where everything is, even if it’s not to scale with the character minis. And being able to use this as a starship or hovercraft now has me thinking about running a science fiction game, which I haven’t wanted to do in several years. I’ll just need to figure out a way to paint out the huge logo and it should be ready for gaming.