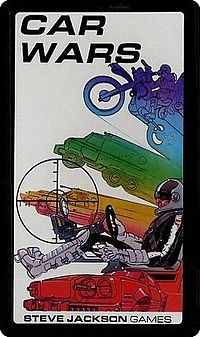 Recent discussion of the Tin reminds me of Car Wars. Starting sometime in the late 80s, my interest in Car Wars paralleled my interest in RPGs. For a few years there, I gave both an equal share of my free time.

My strongest association with the Tin and Car Wars is a horrible campaign I tried to run at the Tin which would pit various teams and vehicles against each other. I had really not thought out the GMing logistics or budgets for such a campaign, and it fizzled almost before it started. Also, one player named Bob found ways to manipulate my setup enough to make me really, really dislike rules lawyers for a year or two.

My interest in Car Wars continued, though. I kept buying the supplements, even though I sometimes got annoyed at how poorly playtested some of it seemed. But it was so much fun that I kept up with it. It was tremendous fun designing cars — much like I imagine the fun of building a good CCG deck to be, with the balance of power, flavor and various subsystems. It’s about constantly striving for that perfect design. Car Wars, I realized at some point along the way, really is for min-maxing; Bob, who’d nearly ruined my enjoyment of the game so many years before, was just exploiting the game better than anyone else.

When I got to college, some of my gaming friends were also into Car Wars. We played occasionally; sometimes, if I remember right, Saturday gaming would be Car Wars instead of whichever RPG campaign was otherwise being run. And when I moved into one particular residence hall, I was lucky enough to have a roommate and a hall director who were into Car Wars.

We were all fairly well into the game. I ended up with a pretty large collection: all the Uncle Al’s catalogs, the AADA Vehicle Guides, quite a few issues of the AADA Quarterly, three or four different editions of the rules (gotta have rules for gasoline engines! gotta have rules for blimps! gotta have all the latest errata!) and a huge assortment of counters and maps. I tinkered with starting an actual AADA club and with trying to use Car Wars as an RPG, with continuing campaigns, roleplaying and the whole deal.

I have fond memories of someone suggesting, around midnight, that we play Car Wars. We’d have cars designed by about 2am and usually be done playing by 5am. When we had classes in the morning. Ah, the excesses of youth.

We spent a lot of time trying to tweak and optimize different designs. For quite a few games, I kept trying to make a workable ramming vehicle. Usually pickups with a lot of metal armor on the front. I never managed to pull off an effective ram, but I persisted. I also usually tried to work in a turret, while a friend was always satisfied to just have one or two arcs of fire available. We all had our design predilections. Car Wars is, or at least was, very much a game for design optimization and min-maxing.

One night, we had a pretty high budget ($40,000 or so, I think it was — and remember that’s effectively 1980s dollar-equivalents). I was running around with a ram-based design with, probably, a turreted vulcan MG or laser (low to-hit numbers — another design predilection of mine) and missing a lot, as usual. I think my friend was running something with an anti-tank gun mounted forward (he preferred rarer hits that hit for a lot). And the hall director was running the weirdest design I’d ever seen.

His car just drove around the track, dropping junk as it went. Junk droppers were, at the time, a new addition to Car Wars; they just add a tiny little hazard to the track, one that is pretty easy to avoid driving over. The hall director also kept taking pot-shots at us with some minimal weapon: a vehicle-mounted shotgun or something. Neither the junk dropper nor the shotgun cost much at all. My friend and I were completely puzzled as to why he wasn’t hitting us with anything more powerful. Where had his $40,000 gone? We good-naturedly kidded him for designing a car that was so useless.

Finally, when the cars’ positions were just so, the hall director said,

“Now I trigger the detonator.”

“The detonator for the huge mound of plastic explosive that is located in that junk pile,” he said, pointing to the pile that was neatly located a short distance between my friend’s car and mine. Located, of course, on the other side of the board from his car.

We looked up the damage, which was well into “rip up the car counters and drop them from a great height above the table” range. My friend and I stood agape for a few moments.

Then we congratulated him on the perfect design. And we never played Car Wars again.