Monsters and eerie creatures in a setting should be mysterious, I think. Not cookie-cutter, copied-from-the-manual things that players already know:

Green hair, orange wings, floating on a glistening bed of slime? Yeah, that’s a Wumpuscule. It has flaming fingernails, is invulnerable to edged weapons, gets a +4 to surprise attacks… I think you’ll find it on page 147 — no, wait, page 142 — of the Creature Catalog.

Nothing drains a game of adventure as fast as knowing exactly what to expect. So how can you preserve mystery surrounding creatures that PCs encounter? 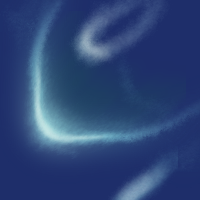 One method I’ve found that works well is to simply not know where things will go. If you don’t know how a creature works, then the players won’t, either. For example, when a Blade & Crown group encountered some dimly glowing forms in the ocean near their ship, I was thinking vaguely of an etching by M.C. Escher called Dolphins in a Phosphorescent Sea. (Note that my illustration here is not that etching, because Escher’s original appears to be under copyright.) But those strange glowing shapes were really about all I had in mind; no particular abilities, motives or even physical substance. It just seemed like a potentially interesting thing to throw at the players.

Among other things I hadn’t decided beforehand about those strange, glowing shapes was what they’re named. Was it the first time humans in that campaign world had encountered such entities? Probably not. But that’s the thing about myth: information gets twisted, retold and re-spun until what one person calls a “wyrm”, another calls a “dragon” — and another calls a “snake”. So, I reminded myself, there’s no need to have a specific, established name for these creatures.

Upon examination, one character remembered hearing some tales about them. (A fun character: a pedantic scholar, sort of a sage, seeking information about different flora and fauna.) If memory serves, he added a bit about how they’re the spirits of drowned sailors. This gave me some interesting ideas, so I asked the player, John, to name these strange glowing shapes.

This took a fair amount of player trust, of course. He could’ve called them “Nurnie Bloops” or “Glowy Water Thingies” or any other flavor- and immersion-destroying thing. But he’s inventive, and he knew what flavor I was trying for, and he was into it. So he named them “Spirit Dolphins”.

It’s really quite a lovely name, one that encapsulates what the creatures are, while preserving a bit of the mystery surrounding them. I liked it so much, actually, that I included them with that title in the “Fanciful Creatures” section in Blade & Crown, and credited John with naming them. I kept the description intentionally vague, so as not to deprive you of your own interpretation of how spirit dolphins — or whatever your players choose to call them — work.

In fact, I tried pretty hard to preserve some mystery around all the encounters presented in Blade & Crown. If I may quote myself:

It is especially important to point out that many of these creatures are fanciful or downright mythical; their actual characteristics, if encountered, may vary wildly from the prognostications given here.

Adventurers, by the same token, shouldn’t already know that Grenge-beasts are immune to silver, or that threlks always lay their eggs in water. If you think about how information flowed in the middle ages (and heck, how information flows now), there are usually competing theories for quite a while, until someone pins it down. Following that model, there are many theories on how exactly spirit dolphins work — but for now, a lot of mystery remains. So perhaps one person says that those glowy shapes are the spirits of dolphins who’ve sacrificed themselves to save humans; but someone else says they’re sirens, trying to lead sailors astray. And others don’t believe they exist at all. Putting out conflicting information in this way has the happy effect of both a) preserving mystery and b) making it feel more like the way the real world works.

Even the name may not be objective. As I mentioned above, one person’s “dragon” may be another’s “snake” and another’s “griffin”. So does everyone in Calteir call those strange glowing marine forms “spirit dolphins”? Almost certainly not. But it’s what the characters call them, and that is (for most purposes) what matters.

Do I, as the GM, know how spirit dolphins work, and what they’re about? Certainly. I have access to the ‘objective’ truth, to the extent that any exists, for my campaign world. And the same goes for lots of other unusual creatures. But because of how we tend to treat rules as written in stone, even when we remind ourselves not to, and because of the way things get reified in RPGs, I find the best way to preserve mystery is to present some things in an ambiguous way.

This can, of course, be frustrating if you need a monster now. GMs don’t always have the ability to create monsters on the fly: maybe the system isn’t flexible enough, or the GM doesn’t have the practice, or just doesn’t have the time. I tried to strike a balance in Blade & Crown, by presenting some systems for unusual effects (incorporeality, swarms, etc.), by giving stats for a good smattering of creatures, and by giving frequent reminders that everything presented is only a serving suggestion, not the way it has to be.

Another prime method of preserving mystery with regard to monsters is simply to keep them rare. This keeps monsters from feeling like extruded random silliness. It keeps them at the edge of the characters’ world, where shadows lurk and unknown elements can stay mysterious. It also helps save you, as GM, time. Not having to come up with a new flock of beasties every week means you can allow those select few to feel more organic and more well-developed. That means that the week’s scenario planning can’t just consist of “roll percentile for which page of the Creature Catalog they’re fighting this time” — but if you’re striving for mystery, that’s probably not a good place to start anyway.

Okay, time to sum up. Here are my favorite methods of keeping creatures mysterious in RPGs: