One of my favorite time travel stories — no, strike that, my favorite time travel story — is “Vincent Van Gogh”, by Sever Gansovsky. It postulates a future year (1996, a couple decades away when the story was written) where time travel is extremely expensive, taking a great deal of Organized Energy Units to do. And the Universal Law for the Preservation of the Past is extremely strict: mess with the time stream and you might get sent back to the Mesozoic to fend for yourself. But more importantly, messing with the past just seems to create a mess. 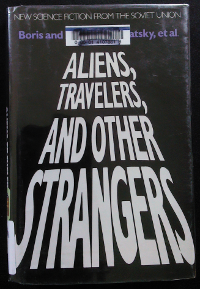 The story was published in English in the collection Aliens, Travelers and Other Strangers: New Science Fiction from the Soviet Union, edited by Boris and Arkady Strugatsky and translated by Roger DeGaris. I read it when I was young, and recently admitted to myself how much I’d been wanting to re-read the story, so I tracked down a copy of the book.

(In doing so, I discovered that it was made into a film in 1985 in East Germany: Besuch bei Van Gogh. I will hopefully track down a copy of this one day. I have no idea how closely it hews to the short story, so I’m only discussing the prose here.)

The main plot is pretty simple: the protagonist tries to get his hands on Van Gogh’s paintings, far before Van Gogh became famous, and before his paintings became incredibly valuable. Each attempt fails, though, for different reasons:

I won’t spoil how the plot wraps up. But I will note that there is a clever, subtle framing story there.

I’m also going to quote from the last couple paragraphs, which I find very inspirational:

The future is an infinity of alternatives, and which will become real is decided by all of us. I know one variant, but there are an infinite number, and so I can’t say anything in advance beyond the most general things.

So don’t ask what tomorrow will be. If you want it to be glorious and beautiful, make it that way.

There are generally two poles in time travel thought: one, that the past is unchangeable and inviolate, and that the timeline will always find a way to return itself to true, no matter how you may mess with it; and two, that time travel causes changes small or large in the time-stream, creating many worlds.

“Vincent Van Gogh” seems at first to be of that first “you can’t change the timeline; the past is hardwired” variety. Everything the protagonist does seems to result only in him becoming poorer, and in the timeline finding its way back to true. But the end reveals that all the protagonist’s actions have had small effects on the futures he’s been returning to. His cohort Cabusse, for example, is eventually revealed to have become “Babusse” through his intervention in the timeline.

The story is an interesting, nuanced take on time travel, somewhere between the “many worlds” thesis and the “unchangeable timeline” theses. “Vincent Van Gogh” really does center around time travel, unlike a lot of fiction where time travel is merely a vehicle for weirdness. The story also paints a vivid picture of van Gogh, the person: troubled, humane, genius. And the story expresses a kind of weary hopefulness that seems particularly Soviet to me. “Vincent Van Gogh” is quite good.

And I think it has some interesting implications for RPGs, which I’ll discuss next time.