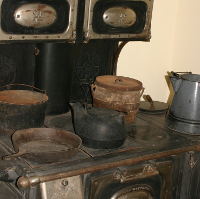 Is that stovetop gettin’ a mite crowded?

After tonight’s game (a fun take on the standard train robbery scenario), we briefly listed what games we currently have on the back burner:

That list is sort of in order of my preference for bringing games back off the burner; I’d definitely like to revisit Eric’s B&C game sometime. It would also allow for new players to join in easily, because we’ve got a whole pirate crew from which to find new allies. But all these games would be fun.

By contrast, my monthly group only sort of has one game on hold — my Spheres campaign. But we haven’t run that for years, and I feel like it’d be hard to pick back up. Not to mention that I haven’t felt like running SF much in the past half-decade or so.

Edit: Here are three more I’d forgotten to note, as mentioned in the comments:

So we’ve got about nine games on the back burner, it seems.