This was a FATE game, run by John. As per the Kerberos Club setting, we were all strange heroes of a semi-mythic Victorian age. And because we were playing a very light form of FATE (same as Bob’s Friday game), we did character generation as part of the game.

One character was a Tarzan lookalike; one was a master of dolls and puppetry; one was a not-so-masterful magician. Bob was in the game and, I think, inspired by the same thing I was, because we both had the idea of playing robotic ghosts of some sort. Our characters ended up duplicating each other’s abilities a bit, but I think we both got to do important, useful things. John had us all detail items we’d helped our patron, Geburah “Lady Time” Splinter, to retrieve, giving us all a sense of cohesion and purpose. 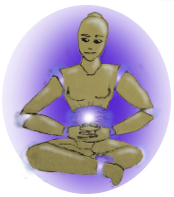 The character I ended up creating was called the Golden Boddhisattva: somehow incarnated in the body of a metallic shell by Tibetan Buddhists, with the ability to project herself into other states of being. (I was primarily thinking of the Dharma Body of the Buddha here, but there were other inspirations in there. I think I was also inspired by the art of Wang Zi Won.) She is dedicated to determining what brought her into this strange incarnation, and to teaching the Dharma where she can, often with a simple smile.

There were some social contract issues. One player has a tendency to grab the spotlight and never let go of it. That player also incessantly bemoaned the actions of another player; by the end of the game, it had started to cross the boundary between good natured in-character ribbing and annoying player-versus-player whining. The group managed to find ways around those problems, mostly.

What a day it’s been! Hell twice, and tea!–Derick

Aside from those issues, the game progressed wonderfully. Considering how little time we had (a few hours), I think that may have been the vastest game I’ve ever played in. We were members of the Kerberos Club who discovered that our patron was being slowly drained of her energy by a strange orrery-shaped device. We eventually traced the nefarious plot through the Greco-Roman underworld (where Bob and I fed an orrery to Cerberus), confronted a charging triceratops in the streets of London, pried ourselves away from the Eternal Tea House, calmed an equally enraged elephant in Kew Gardens, discovered a house in which every door held a different universe, dealt with identical men on velocipedes, ventured into a future filled with flying cars and discos and, eventually, we saved Lady Time. It was — and I almost never use this word — epic.

John allowed me to narrate one particularly vast bit of sub-plot: my character ventured through one of the doors into the time of the dinosaurs, where she sparked a civilization of vegetarian sauropods shortly before they were all killed by the Chicxulub event. She then was reborn as a variety of different creatures, doing her best to spread the Dharma throughout, and eventually reaching the status of Boddhisattva — but still not knowing how she came to be in her metallic body. She walked in the front door of the house, never having left the room to 65 million years ago. Reliving my lives again gave me valuable insight into the mystery of Lady Time. I hope I wasn’t showboating or stealing the spotlight here, but it felt appropriately boundless in scope.

In the end, we solved the mystery and returned Lady Time’s incarnations. John had a nice callback to the items we’d helped Lady Time recover, as we discovered that she’d been trying to correct the time stream with each one of them. I’d already had my suspicions, but at this I was pretty certain that Lady Time was based on a character of mine I’d used in one of John’s games: the Judge, a stern Timelord who ventures through the timestream setting chronology right and returning things to where they go. I later asked John about this and he confirmed my suspicions. This is now the second time that John has based a character on the Judge. Since I only ever played the Judge once, John has now used that character more than I have!

As the game wound down, I noticed that my character had never done anything violent. Fitting. It was a great game, full of action, mystery, excitement and wonder.