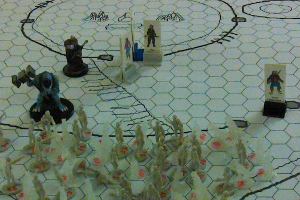 My Saturday morning game was GURPS Zombies: Fantasy Punk. The setting is early medieval Europe (I wasn’t clear if it was 11th or 12th century CE) with fantasy trappings: elves are largely from the Black Forest, etc. We were a group of pretty high-level characters running through a zombie-infested swamp; we had little time to rest, as the zombie horde was slow but implacable.

We eventually found a defensible place to rest, but before we could rest we had to fight off the zombie hangers-on that had accumulated. That meant the game really consisted of one long fight: six PCs fighting 144 –yes, one hundred forty four — zombies.

The GM for this one, Jeff, had a number of interesting techniques:

Since we were playing GURPS with lots of supplements and optional rules, that meant there was a lot to keep track of. I’m not averse to realistic games, or even relatively complex games, if the things to keep track of add into the sense of immersion and realism and don’t multiply mechanics unnecessarily. If a subsystem seems necessary to making something make sense, and if it meshes well with the rest of the system, I can deal with it. But GURPS has a lot of fiddly subsystems that add to my sense of confusion while not adding to my sense of immersion (mages need good throwing skills so they can throw fireballs! sometimes you want to roll high, sometimes you want to roll low and sometimes you don’t get to roll at all! don’t forget to attempt blowthrough after every strike, which is of course at a very different and dynamic skill level than the original attack! don’t forget how this combo meshes with that combo, both using different skills and modifiers!), and it felt very detailed without a lot of return in terms of game play. But that of course is subjective.

More objectively, I think it took too long. 144 zombies is a lot, but I’m talking about between one person’s turn and the next. By the end, I started to get the swing of things, and so did some of the other players, but I was still requiring reminders, as were other players — even the ones most experienced with GURPS. Heck, Jeff himself sometimes couldn’t figure out what a given modifier would be. By the end, to speed things up, we started pre-rolling our own attacks! Maybe a group heavily experienced with GURPS could do combat turns in a reasonable amount of time, but I’m doubtful.

The combat ended up being pretty well balanced. Our characters were very high-powered; I don’t know the point totals, but I assume they were in the 200-300 range. 144 zombies was just about the right challenge level for us. At the end, the scout’s foot had been badly maimed and my character was fine until a lucky zombie shot nearly took me out.

There really wasn’t much opportunity to roleplay. One player managed to get into his troll role pretty well, but other than that, there wasn’t much interaction; zombies are not great conversationalists, nor does a mass of them allow for investigation.

Even so, people latched onto tiny bits of characterization in interesting ways. Jeff explained that we were all mercenaries who didn’t especially like each other, but respected each other and had agreed to work together. Some players immediately tried to turn this into intense raging hatred for other characters. A character whose IQ was slightly below average immediately became completely dumb; if there was beer to be drunk, it had to be drunk loudly and by the barrel. This might be partly just how some players do their roleplay, but I think it’s also related to what gets reified: when players don’t have a lot to base their characterization on, they may exaggerate the few details provided to fill some kind of gap. Hm. I will ponder this.

The lack of roleplay, pregen mooks and numbers, combat-heaviness and the achievements all made it feel a bit like an analogue MMORPG. I don’t think that’s the strong suit of RPGs, but sometimes that’s what you want in an RPG. It was good fun, in spite of some problems.

Oh, also: I realized after the first turn that the combat was going to progress as a wave of zombies crashing over us PCs. A lot of RPG combats could look pretty unintelligible to a bystander, but this game clearly moved in a fluid fashion from one round to the next. And I figured out that putting a series of photos together would make a pretty good movie:

At the end, the paladin’s sudden surge of faith caused a vast number of zombies to go *poof*. I decided special effects were necessary here; it was a dramatic end to the game.