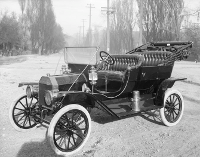 Did we see one of these? Probably

This was run by the inimitable Bob. At the start, the players were just John and me. Bob ran this using a very light version of FATE; because the rules are so simple, and because all three of us are pretty familiar with the game, we created characters from scratch.

The setting: 1920s Cincinnati, when George Remus was the most prominent gangster. John’s character was a driver for Remus; mine was an enforcer. As I envisioned her, she looks like Chiyoko from the Akira manga.

The scenario was that one of our regular deliveries (“losses”) of hooch got held up by a rival gang, leading to an investigation, duplicity, negotiation and confrontation. It was quite fun. There were about three main factions involved, and it didn’t seem like Bob had a particular resolution in mind, which I like. In the end, we even found a non-violent way to wrap it all up. (Which I think took us all a little by surprise — everything seemed to be heading for a big battle at the distillery, but then a non-violent solution kind of snuck up on us.)

Bob’s GMing was great. He researched the period pretty thoroughly and dropped in a lot of atmospheric details: what a weird truck the Nash Quad was, Remus’ joviality, a Chicago mobster’s disapproval of Cincinnati Chili. Bob also brought out one of the best props I’ve ever seen in a game (which I won’t spoil here), and managed to pull off making Remus seem like a dangerous nice guy (a hard feat of characterization).

The game in general was lots of fun. A late addition player kind of hogged the spotlight, but it worked out anyway. We got to do a lot of nifty things, with good action scenes, opportunities for roleplaying, mysteries to investigate and ways to affect the story. All in all, a great opening to the weekend.

It also reminded of what a bizarre place the Twin Cities were in the Prohibition era, and of a Call of Cthulhu scenario I’ve run set in that era. Hmm… I’ll have to describe that scenario here sometime.