For Heirs to the Lost World, Chad Davidson created NPC cards: just the right size to fit in Magic: the Gathering card sleeves, and with just enough information to run NPCs in combat. It was obviously a brilliant idea, so I implemented something similar for Blade & Crown. 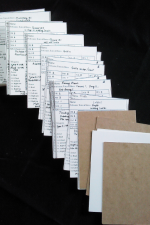 Although you could use the NPC record (PDF) many ways, the method I intended is to print a dozen or so copies of the sheet on stiff paper or cardboard and then cut the sheets into cards. With this, I’ve made several dozen NPCs. I usually write the NPCs up in pen, allowing me to use pencil later on for temporary notes (combat damage, motives, even names). That way, I can erase the cards as needed and re-use them. That’s another reason to use thick paper: it resists erasing better. I printed the cards single-sided, so I can use the backs for additional notes — though, if an NPC is going to be long-term and require tracking notes, I eventually give them a fuller record elsewhere. Also, when I got them printed at Kinko’s, I asked the folks there to give me the chipboard backings they use to make the cuts; these backings make great covers for stacks of cards, allowing me to use rubber bands to hold the stack together. I keep them in one big stack, in alphabetical by character/creature type, making for easy searching when I need an NPC. I also keep cards tied to specific scenarios separated by the chipboard pieces, making it even easier to find cards for particular uses.

So far, the NPC cards have been a very successful experiment. Just a few days ago, I printed a bunch more, mostly because I need quite a few more NPC types for Con of the North. Future plans:

For that last one, especially, let me know what kinds of NPCs you’d like cards for!

Apologies for not posting recently. Life has been hectic.