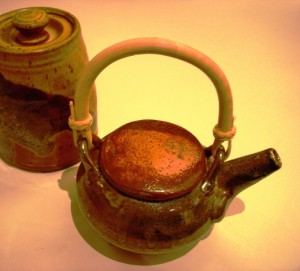 In the marketplace, or sometimes in other areas of town, there’s a man of indeterminate age who carries a great wooden box on his back. When someone asks him what he sells, he will take the box down off his shoulders. Through a remarkable series of contortions, the box becomes a portable tea brewing stand. That’s what he sells: fresh, hot tea.

The box contains a small jar of hot coals, a few simple tea cups, a tea pot, a larger pot of cool, clear water, tea tools and a paper packet of tea. With the contents of the box, he makes a tea that tastes clean and light. Anyone who drinks it immediately feels refreshed.

The man sometimes has a few tea cakes. The cakes are also very light in taste; in fact, the taste is hard to describe. Different people will alternately describe it as sour or sweet, like flowers or like honey.

The man doesn’t always have tea cakes, and he sometimes refuses to sell them to particular people. In fact, it sometimes seems that the cakes are for specific people; he will almost forcefully offer one person a given cake, while giving another person no cakes at all.

The man himself has short, thinning hair, a scraggly beard and teeth that are slightly yellowed (no doubt from drinking so much tea). He is wiry and muscled and dresses plainly, or perhaps he is just poor. He usually speaks in short sentences, if at all. His prices are very reasonable. If someone is clearly in need of refreshment, he will charge nothing at all.