Like a lot of people, I’ve played the Android game 80 Days a bit lately.

I like a lot of the writing, which is generally quite clever. Although based on Verne’s novel, it has a lot of additions, in the form of worldbuilding and additional storylines. The world of this game is very steampunk, with an Artificers’ Guild who build glittering automata, and glass crystals used as computer memory devices. There are, de rigueur, multiple kinds of airships. Yet the writers are clearly conscious of the problems with steampunk, including its very strong tendency to glorify imperialism and other harmful historical trends. So 80 Days has stout women engineers, various countries throwing off the yoke of European domination, and a (potentially) wide-eyed protagonist, eager to see both the technological and social marvels of this new era. 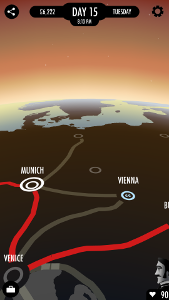 Also, the game is incredibly pretty. The graphics are very nicely stylized; the technology is represented in blocky black-and-white illustrations that suggest steampunk niftiness without explaining how anything works. The interface — a mix of branching paragraphs, common to this kind of interactive fiction app, and a quick-scrolling globe dotted with transportation options — is smooth and generally gorgeous.

However, I still have a lot of problems with the game. First, maybe most prominently, is the fact that there’s no choice regarding the protagonist’s gender. Regardless of all the other choices you can make, the game is always played as Passepartout, the male valet of Phileas Fogg. Of course, in the original story, Passepartout is a man. But the game diverges from the source text in many important ways, so why not make this critical thing open to variation as well? As we’ve seen before with a lot of other games, the argument “But allowing women PCs would cost too much development time!” doesn’t make sense here, as they clearly spent plenty of development time on other aspects of the game (little animations for travel, a smoothly-spinning globe as the overall interface, etc.). And the background includes plenty of other women characters, so why not make arguably the single most important choice — the player’s own character — have more than one gender option?

In general, for a game that is all about choice, there is sometimes surprisingly little choice in 80 Days. In one play-through, one of the characters told me that some commodity was valuable in Vienna, and my money was already running low, so I bought the commodity and then tried to get to Vienna to sell it. I was in Munich or Prague (I forget which now), only one stop away by pretty much any means of transport. But, as it turned out, there was simply no way to get there. After an in-game day or two of exploring, planning and interacting at night, no routes to Vienna appeared. As an experiment, I decided to see if the game would ever give me a way to travel to Vienna. I think I spent about an in-game week waiting for any train or wagon or whatever, but nothing ever appeared. There was also no way to discover new routes, or discover some furtive means of transport via nighttime exploration, or anything else. It was like to game’s creators had decided to play with me: trust anyone in this game, and you’ll get screwed over — not by the untrustworthy characters, but by the game itself! Very frustrating.

Other times, the sentence fragments from which you choose the next arc of the story seem deliberately misleading. A choice of “I decided to avoid them…” might quickly turn into “…but I could not help myself from being attracted to their wares” or somesuch. It feels at times like the game’s plot is predetermined, and the choices offered are only illusory.

In another play-through, while traveling through Hong Kong, the game abruptly informed me one day that my PC had become addicted to opium. I had no choice but to sit there, destitute, for about two in-game weeks. There was literally nothing I could do to change this; all other options that I would normally have were greyed out or unavailable. I could either quit the game or continue on the awful path the game had decided to set me on. (There’s only one saved game at a time, so it’s either continue on with whatever has occurred, or restart from scratch.) 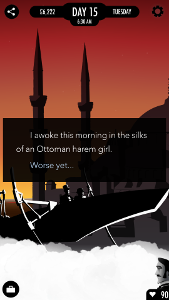 In my most recent game, upon starting a new day in Istanbul, the game told me that I had awoken in the Topkapi palace “in the silks of an Ottoman harem girl”. Basically, the incredibly tired and terrible “forced crossdressing” trope: the game trying to appear edgy by including crossdressing, while giving cissexist people an easy out by claiming that it wasn’t by choice. There are a ton of things wrong with this trope that I won’t explain here. Simply put, I find this writing lazy, transphobic and — perhaps worst of all — very detrimental to the sense of player agency.

Perhaps 80 Days is supposed to be only partly-interactive fiction, where we sometimes have to surrender ourselves to the author’s vision. But it seems that that vision is sometimes downright cruel, or actively making fun of the player. To have the story abruptly inform me that I’m addicted to opium, or tauntingly prevent me from getting to a place that the game enticed me into visiting in the first place, disrupts any trust I have that the story is leading me to an interesting place.

Maybe the occasional “railroading” is a comment on the nature of imperialism? Or the nature of life itself? Perhaps 80 Days is fundamentally about how we are sometimes just tossed on the seas of destiny, and how we don’t really have agency in our own lives? Well, honestly, I get enough reminders about that from my actual life. I play games to explore interesting, meaningful choices. For now, in spite of all its interesting worldbuilding and beautiful graphic design, I’m done with 80 Days.