After real life annoyingly asserted itself Monday night, those of us who were able to come had our scheduled game of Ryuutama. I was GMing, with a scenario idea that had occurred to me a few days before.

So far, all our games in Ryuutama have been about traveling through an island surrounded by steep cliffs, with gorgeous mountain views and deep blue ocean waves all around tiny villages hugging the coast. 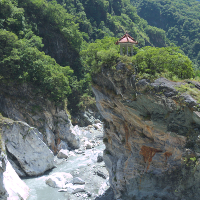 In Monday’s game, the PCs discovered a village dependent on a river whose water was running dry. The PCs traced the river into a deep gorge, leading high into the mountains. They confronted a tempestuous, imperious dragon, then negotiated with a petrified frog. There were discussions about red lightning, golden crowns, and taxonomy, and ontology. In the end, they managed to get the crown returned, and the water flowing again.

At first, I was thinking we wouldn’t have enough time to finish, and that it would be another dangling thread in our weave of Ryuutama canon. But we kept charging ahead, and even though we took nice excursions for froggy pastures and mountainous beauty, we still managed to reach a satisfying conclusion in time. The players very nicely anticipated my scenario, adding details that not only didn’t conflict with what I had in mind, but in fact deepened and in one case seemed to directly prefigure it. And though there was conflict, there was no violence at all. It was another rather nifty session of Ryuutama.