We’ve continued playing Ryuutama the past few sessions. It’s been set on a mountainous island with great rocky cliffs and tiny villages hunkered beneath them, next to a big beautiful ocean. No fair guessing what island inspired this.

It’s primarily been John running the game, actually, as not everyone in my game has been available. Also, I’ve been really busy.

John’s game has been a lot of fun. It started as a sort of side-canon to my game, with most of the same characters as in my game. We’ve now run more sessions in John’s version of the setting, though. Neither one is the ‘primary’ canon now, really. 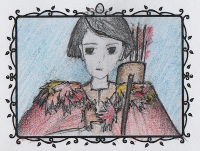 My character is Akiko. I usually like to play a hunter or forester-type my first time out in a fantasy game, and Akiko is no different. True to her name, she has a cloak with what looks like autumn leaves as epaulets, and she’s pretty good at tracking. (Supposedly, anyway. My luck with die rolls has made this less than true.)

The previous session, we’d journeyed to a monastery on a mountain where they were using utterly flawless pearls as part of a giant abacus. What exactly they were counting, we weren’t sure. But they gave our characters provisions and set us on our way — and thus began our most recent session.

Descending the mountain, we got lost in the misty valleys, and eventually encountered a shark-boar-creature at a waterfall. As the two sides closed on each other, I had Akiko run along the edge of the waterfall, teetering along it before returning to balance, in true Hayao Miyazaki style. (Seriously, Miyazaki has this happen in just about all his movies. Please let me know if you find a movie where this doesn’t happen!)

Akiko’s bow was not nearly as effective as Farmer Parsley’s rake or Merchant Jo’s wakizashi. They made good use of the muck on the ground and the birds flying nearby. But Akiko landed the final blow. She took a handful of marsh boar teeth as trophies, and then danced around in a very cute way, proud of herself — her main reason for Traveling is to defeat great monsters.

Finally, we returned to the cave at the base of the mountain, where rejected pearls clatter down from the monastery above. Jo, ever with an eye to profit, tried to grab handfuls of the beautiful baubles. (He is Traveling in search of profit.) A quivering Slime came out of the pearls, and we were all suddenly braced for combat. We detailed the Objects of the cave and made up the combat record. But as my first action, I had Akiko try talking to the Slime, and to Jo: “Jo, are you okay? Slime, are you okay?” And I got a critical, so it worked! She was able to gain the trust, if not friendship, of the Slime, and the combat never happened. Jo traded bunches of beast teeth to the Slime in exchange for lots of pearls. (Akiko didn’t notice that the teeth were, sort of, hers.) It was easy to picture the slime with a cute grin on its face, getting a nice bargain and some new friends.

All in all, it was another great session. Ryuutama has continued to have a very Miyazaki-like feel, with some near-deadly combat and some peaceful resolution through communication. And a nice dose of cuteness.