The other FLGS (after going to two branches of Alchemy) I had to visit in Taiwan was 女巫店 Witch House.

It’s not strictly an FLGS, I suppose. They sell games, and they’re plenty friendly. Primarily, though, Witch House is a pub. Lots of people go there with no intention of gaming or buying games. There is sometimes live music; they serve alcohol; they serve snacks and set meals. I’ll note here that they also have one of the funniest, punniest menus I’ve ever seen. It doesn’t make a lot of sense if you don’t know Chinese, and the current menu is actually a bit toned down from the original one. But still, if you’re in Taibei, I’d almost recommend going to Witch House just for the menu.

However, Witch House is also a boardgame cafe. They have a pretty huge selection of games to just use, and they sell a nice, large variety of games as well. (Not as many as, say, Alchemy, but still good.) On the day I was there, there were two groups of people playing games. One large group was playing Bang; another couple were playing Once Upon a Time. I’m not sure if Witch House does specific boardgame nights, but it seems like pretty much any time (except when there is live music, I suppose), you can just go there, get a game, and start playing with some friends. 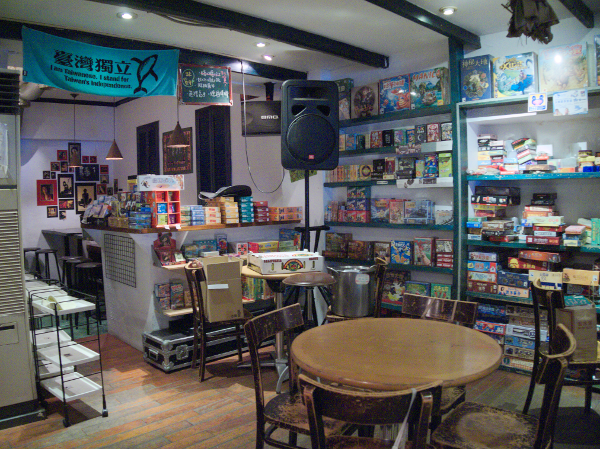 There aren’t a lot of Taiwanese-produced boardgames yet. There are lots (and lots) of translations, so it’s easily possible to play (for example) Terra Mystica, Settlers of Catan or Citadels in Chinese. But there aren’t yet many games actually produced in Taiwan. When I went to Alchemy, I asked them if they knew of any locally produced games I could get; they mentioned The Wonderful Island. I of course bought it. Similarly, when I went to Witch House, I asked if they knew any locally-produced boardgames I could buy. It took a little looking, but they found a copy of 無良商人 ‘Heartless Merchants’, which I bought. It looks quite good, but I haven’t had time to actually open it up yet. Hopefully I’ll be able to review it here sometime in the future.

It’s also worth noting that Witch House has pretty cool politics. Right next to the boardgames, they have a banner stating very clearly their support for Taiwanese independence; nearby is a poster stating their opposition to nuclear power. (Always a sensitive topic on a densely-populated island with not a lot of natural energy resources.) Also, I should mention, of those two groups of people playing games the day I was there, only a handful were men; it’s a very welcoming environment for women. And Witch House is downstairs from 女書店 Fem Books, the best feminist bookstore in Taibei. The two stores’ names rhyme in Mandarin (“Nǚwūdiàn” and “Nǚshūdiàn”), and I assume there’s some kind of relationship between them, but I’ve never been clear what it is. 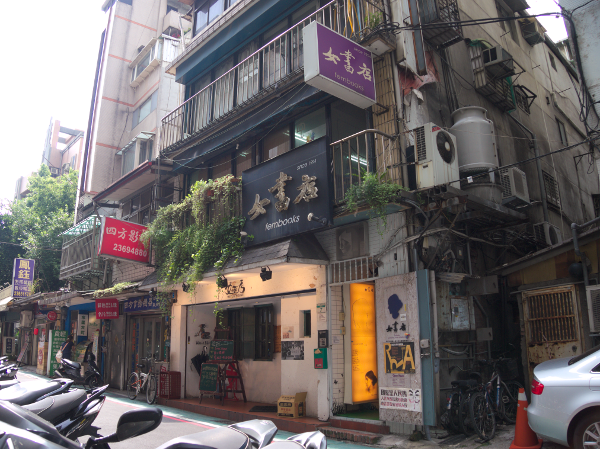 Boardgame cafes have become pretty popular in Taiwan; there are a lot of them. But Witch House was one of the first — it was certainly the only one when I lived in Taiwan, back in 2004. (In 2004, when I was looking for a place to introduce some friends to Search for the Emperor’s Treasure, it was the obvious destination.) If you’re looking for a nice, welcoming place to relax, have something to drink and play a good boardgame in Taibei, definitely check it out.