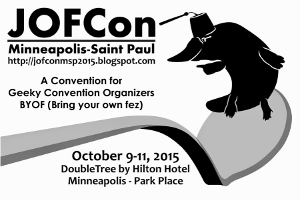 About a month ago, there was a tiny little con here in the Twin Cities called JOFCon. “JOF” stands for “journeyfen of fandom”. It’s a knowing take-off of the term “SMOF”, for “Secret Masters of Fandom”. SMOFs are (at least supposedly) those who view themselves as secret cabal in charge of running fandom. JOFs, on the other hand, are folks who are just trying to figure out how to make it all work.

So JOFCon, which has been running for two years now, is designed for conrunners who want to make their cons run even better. There was a single track of programming, entirely about topics related to running cons: “Disability Access”, “The Future of Fan-Run Cons”, “101, 201, 301: Keeping Programming Fresh”, etc. Programming had its share of problems. I wanted to organize a training about harassment prevention, but Real Life got in the way and I wasn’t able to pull it together. Other aspects of the con’s organization left something to be desired, but that’s all I’ll say about that here. However, the actual discussions were for the most part pretty good, with some good wisdom shared among conrunners from different parts of the world.

The best part of JOFCon, for me, was the chance to connect with people heavily involved in other cons, whom I never get the chance to meet. When we go to each other’s cons, we rarely get even a sense of who each other is, much less a chance to actually talk about how to better run our cons. Usually, we’re too busy running around putting out fires or replacing table tents or whatever else to meet people who do the same things at other cons. And though our names may appear in the program book, it’s rare that we get to know each other face-to-face.

It was especially cool to meet a bunch of the cool people who run Convergence, the huge general SF con in the Twin Cities. A bunch of them are committed to some important, valuable improvements at Convergence. It was good to see what they have planned, and to maybe give them a little help in doing so.

Also, JOFCon was a valuable chance to, I hope, bury some hatchets. Twin Cities fandom has a very long, turbid history, with some real nastiness. There are strong historical reasons for some of the local cons to distrust each other. It was great to have a chance to hang out with people I don’t usually get to meet, and maybe mend some fences.