Sunday evening, I had dinner with John, who then headed out. The con was winding down and lots of people were already gone. I decided to stick around a bit longer, to soak up a bit more Con atmosphere, and I’m glad I did. I ended up meeting with Adam from the Side Project Podcast, and playing a whole new game.

Hopefully you know about the Games On Demand folks. They’re one of the two groups who make it a point of running indie games at Con of the North1. They’ve been running games at Con of the North for a couple years now, and they run a huge variety of cool indie games: Fiasco, The Quiet Year, lots of others that I can’t even remember. And they do it pretty much the entire con. A lot of the people running the room forgo such desirables as joining other games and eating, all in order to keep Games On Demand going.

By Sunday night, the Games On Demand crew were very tired, but were still going — among the last at the con. And I hadn’t gotten to talk to any of them, nor to play anything with them, so I hung out for a bit. Someone suggested playing a game, and next thing I knew, we were playing Lady Blackbird. 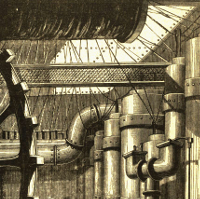 Lady Blackbird is a short game (16 pages) that implies a lot. It has a brief sketch of a setting that looks entirely like a steampunk version of Joss Whedon’s Firefly: a crew of semi-legal adventurers, all trying to evade the Imperial forces in their free trading ship. The characters are even more specifically tied to Firefly, with the hard-as-nails fighting woman who’s bent on revenge against the Imperials, the captain who’s an ex-Imperial, the engineer who’s also intensely loyal to the captain, etc. There are some significant differences: Lady Blackbird herself, obviously inspired by Inara, is capable of magic; and there’s a goblin who could be read as a combination of River, Wash and Jayne, or as a fairly new character. Still, if you only have two words to summarize Lady Blackbird, “steampunk Firefly” is the way to go.

An aside: I know the game is very brief, and heavily based on Firefly. Still, it’d be nice if the characters weren’t so set. Only two of the characters are women, and there’s an explicit heterosexual attraction between the captain and Lady Blackbird. I don’t really see any reason this has to be the case, unless the game is deliberately trying to resemble Firefly. It would be easy enough to give all the characters gender-neutral names, or even no names. I kind of wish the game had been designed that way.

The mechanics remind me heavily of Danger Patrol, where you generate a pool by appealing to particular aspects of your action. In Danger Patrol, it’s by laying out all the ways in which your action is dangerous. In Lady Blackbird, it’s by appealing to aspects of your character. “Well, I’m trying to clothesline a bunch of Imperial soldiers to protect Snargle, so my ‘Combat Tested’, ‘Living Weapon’, ‘Brutal’, ‘Fast’, ‘Hard’ and ‘Strong’ tags should all apply.” The more tags from your Trait you can apply, the more dice you get.

In Danger Patrol, the dice pool can start to become almost repetitious when you’re listing off dangers that you’ve said in a previous round. “Okay, so, just like last time, I’m facing lava, my low sense of self-esteem and Martian wave-guns.” In Lady Blackbird, listing the same personal aspects through multiple actions can start to feel a bit repetitious. “Yep, I’m still ‘Fast’, ‘Hard’ and ‘Strong’.”

Still, the mechanics play quickly and do a good job of getting everyone immersed in their roles. You get direct mechanical benefits for playing in character. It’s a nice, elegant design.

Playing it Sunday night was great. We only barely got out of the brig, but we had a lot of fun doing it. There was a lot of goofy action that I now don’t remember very well. At one point, Lady Blackbird’s spell misfired and everyone near her ended up looking like my character. This caused some great nigh-Shakespearean identity comedy, with various Naomi Bishops running around fighting with other Naomi Bishops. A great last game of the con. I’m very glad I stuck around to check in with the Games on Demand folks — well worth while.

In fact, the game was so much fun that I tried it with my weekly group. The first session was full of barked orders, a tyrannical NPC reduced to a vomiting mess, the sounds of groaning metal, and many gouts of steam. I’m looking forward to the second session!

Footnote: The other group who run indie stuff at Con of the North is House of Indie Games, which I’m a part of. When you’re deciding what to register for, keep an eye out for our events!