Following InSpectres, this was the second game I ran at CotN 2015. After last year’s game, I thought a longer, more in-depth palette would help clarify things somewhat, so I let the declarations go on until everyone was satisfied, not just until the end of a round where someone had passed. So our palette did indeed end up longer: 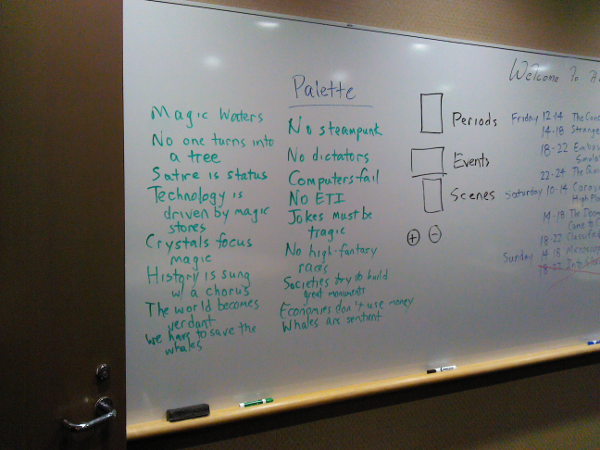 Unfortunately, I think the longer palette didn’t really help much. There were still a lot of definitional questions left hanging: what did “computers fail” mean? What did “jokes must be tragic” mean? What did “no dictators” mean? (One character eventually declared themself to be a dictator, in spite of this ban, and the tension between the factors of “player declaration = truth”, a possible unreliable narrator, and Minnesota nice made the whole situation almost unbearably vague.) There were also a lot of crucial terms left dangling, necessary but frustratingly vague, by that palette. It was unclear what “magic” even meant, for example. (New age woo-woo, D&D style fireballs, a general sense of the connectedness of all things? Still not sure.) It felt like starting grad school, where the first thing you get hit with is the difficulty in pinning down what exactly we mean by all these concepts that are so central to our pursuit. And unlike grad school, we only had a few hours to create our dissertation.

We created a future history of the world where computers fail, but we eventually work towards a Great Equality where everything is basically hunky-dory. Interestingly, cards towards the end of the history were almost entirely positive. 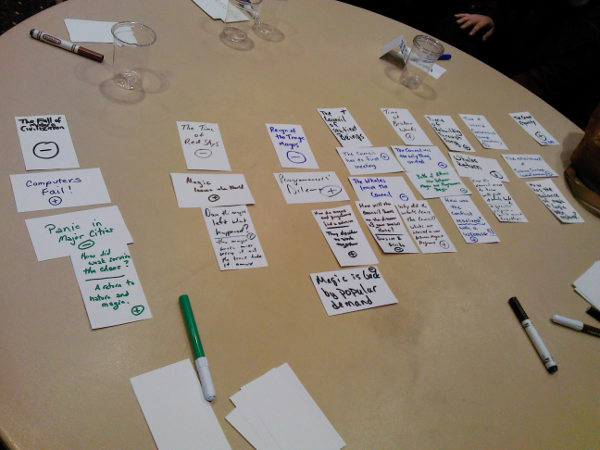 We had some pretty good scenes, with a lot of good roleplaying in council debates. Somehow our history ended up mostly being about the programmers, who were a cult of people devoted to their now-failed computers, and the mages, whom not many people trusted. Sentient whales played a major part in the conflict, eventually teaching humanity the power of song in bringing unification.

However, looking back over that history, I’m reminded of how disoriented I was by so much of it. There’s a lot of it that implicitly, though not explicitly, contradicts stuff already established. The biggest example: the Programmers and Mages apparently reached an early agreement of principles that was deep and lasting, yet they continued to disagree later on about the things they’d already agreed on. Also, there’s that Event card, “The Programmers’ Dilemma”, that I simply never understood. What was it? Some programmers were shaken to their cores by existential questions (which questions?), or they didn’t know what to have for lunch?

There were, in spite of the longer palette time, some strong disagreements in tone and purpose. Some players kept wanting to make it a goofy, gonzo, punning-til-pain comedy; others wanted it to be an epic history of profound Meaning. Some players wanted it to be crystal clear history as written by documentarians; others wanted everything to be Subject To Interpretation. That last, especially, kept veering the game towards vagueness, and ended up frustrating me a lot.

If I run Microscope at Con of the North again, I think I may just have to dictate a few things: general attitude (serious or silly), how specific our cards have to be (maybe a rule that if anyone at the table is unclear, we need to define it better?), what genre we’re playing in. It might be good to solidify the social contract more, through direct means. I might, in fact, just step out of my collaborative role and enter my role as event judge more, and simply state things such as “Sorry, no, that’s confusing. This needs to be better defined.”

Microscope is a great game with deep and amazing potential. However, sharing narrative control with a group of (mostly) strangers is difficult. It requires a huge amount of player agreement before play can begin — and that is very hard, when you haven’t even established fundamental things like what genre the game is.