Last time, we played the humans against the goblin army. It came really close — I think in the end, it was down to one unit on each side, or maybe 1:2. Regardless, a very close game.

Tonight, we did a battle of the humans against the undead horde. It was 2000 points and two players per side. The undead ended up driving the humans from the field.

Also, though, the undead managed to pinch and flank the human knights pretty effectively, with some heavy hitters on the human side getting very effectively slowed down by zombies.

What seems to me the most important factor, though, was the imbalance of archers. The undead had four units of archers, while the humans only had two. That may have made the difference. Hard to tell — it may call for a rematch! 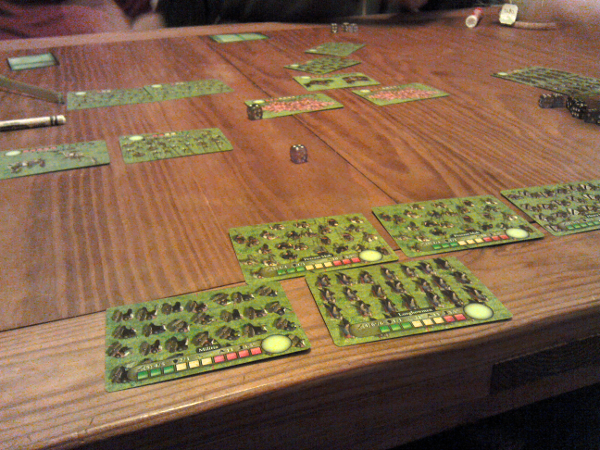 The game went pretty quickly — we finished in about 1.5 hours. We’re still playing a modified version of the quick-start rules; we’ve made it so that everyone finishes moving, then everyone finishes attacking. Completing all of one player’s moving and attacks before going to the next player seems unrealistic, and possibly just plain unfair.

I hope we eventually get good enough to use the “basic” rules, with command cards, standing orders, etc. I love the idea of needing to issue orders to troops; it adds that layer of battlefield communication — and desperation — that is otherwise lacking. But I suppose it probably also takes a lot of time. And the added complication of rules — with special rules for many, many combat situations — must also make it that much slower to play.

In my head-canon, the humans believe they have Manifest Destiny to rule the world; they continue to encroach on other races’ territories. But tonight, the continued tide of real estate-snatching humans was temporarily stemmed. The undead managed to convince them not to turn this ancient burial ground into condominiums, at least for now. But the humans keep coming, and even the armies of the undead may not be able to keep away greedy realtors forever.