If I had as much time as I wanted, I’d probably be a miniatures gamer. I love the intricacy, the skill, the sheer aesthetic delight of painting minis. The maneuvering, the planning, the feints and the luck of battles. And it’s great to see it all happening before you in 3D. (So long as what’s happening is actually representational.)

But, of course, I don’t have time for all the geeky hobbies I’d like to. Is there a way to get some of the aesthetic thrill of miniatures combat, without taking as much time? What if you could, say, eliminate all the painting time?

As I mentioned a while ago, one of my favorite podcasts for tabletop games is Roll 2d6, “With Adam and Nate”. In Episode 9, they reviewed a game called Battleground. Their review is quite in-depth; I recommend giving it a listen.

Concisely put, Battleground is a miniatures game played with cards. The cards are bird’s-eye views of combat units, so one card is approximately one stand worth of figures in most miniatures games. The scale is about 25mm, so the game uses about the same space as a 3D miniatures game: basically, a tabletop or large part thereof. The game also uses (a different kind of) cards for its command and control system.

Adam and Nate made Battleground sound so enticing that I had to try it. Several months ago, I bought some sets for the humans, elves, orcs and undead. The packs currently run around US$12 for a basic faction pack, so a minimum of about $25 for a playable game. Add the (optional) $7 reinforcement pack for a faction and you get about twice as large an army, so about $50 gives you a pretty big range of armies — either two really big ones, or four moderate size ones. Not super-cheap, but compared to the expense for two or more full armies of painted 25mm miniatures, it’s definitely on the affordable end.

Having those armies in Battleground means many different possible scenarios: different factions, different armies within those factions, different terrain setups, different goals, etc. It’s really a full 25mm-scale wargame, with all the scenario possibilities inherent in that. Minus: No cool 3D miniatures to look at. Plus: a complete playable minis game fits in a small bag. 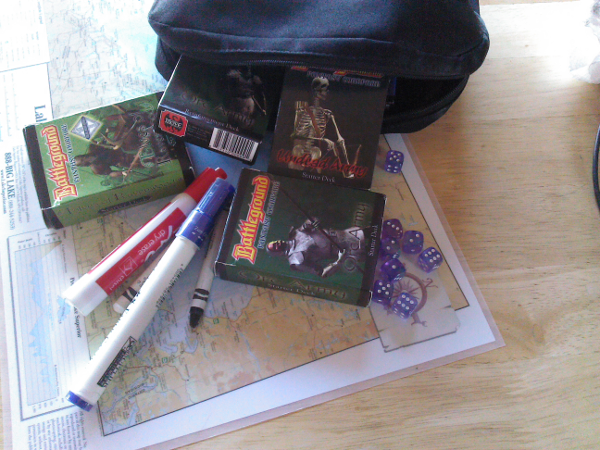 A few weeks after buying it, I finally got around to play-testing the game by myself and trying to figure out the rules. (By myself? Yes, this is another plus of the game: it’s pretty easy to play solo. Adam and Nate mentioned that solo play was a possibility, which I think was what finally tipped me into buying the game.) It’s possible to give a unit orders and then let it keep going, based on those orders, through the entire game. One unit type, the Crazed Goblins, have the permanent order “Close and Attack”, meaning that they basically run on autopilot.

So I played a couple games. The first battle was a small group of humans versus the crazed goblins; the second battle was a small group of humans against a similar group of crazed goblins. Both games were around 415 points, which is considerably smaller than the recommended 1500-point starting game, but a nice small scenario seemed to work well for coming to grips with the rules. Both games lasted about 45 minutes from start to finish.

I happened to have a map of Lake Superior available, so I used it as impromptu terrain. The scenario: after years of development, the humans have encroached on the orcish lands, and now they’ve sent a small scouting party (some sword-fighters, a unit of archers and a unit of peasant militia) to claim Superior Pool. The orcs, enraged, try to resist.

The humans formed up, trying to protect the archers while they peppered the goblins from a distance. The goblins tried to close as fast as possible and get rid of the humans. 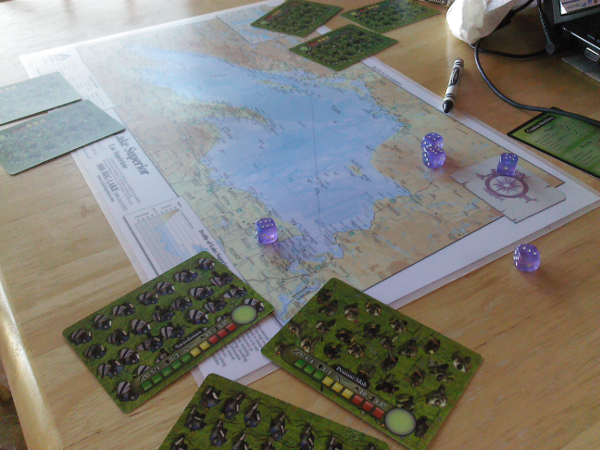 The sword-fighters destroyed two units of goblins before falling. Eventually, it was down to just one unit of goblins and the archers. The archers weren’t especially hurt, and in spite of their lack of melee prowess, they prevailed. The archers had plenty of damage boxes left, so they weren’t really in danger. But still, it was tense! And very well-balanced — it felt like the battle could go either way, every turn.

Playing the basic game was pretty enjoyable. All movement and range is in multiples of card dimensions (width, length, ½ width, etc.), so you always have ready-to-use rulers available. There’s a fair amount of die rolling, which is aesthetically pleasing. The game seems very well balanced, and there’s a real sense of battles coming down to critical moments of morale and tactics. The peasant militia routed at their first contact with the goblins, which just makes sense.

I later did another scenario, this time elves vs. orcs, to try out the Basic game. This includes far more of the rules, with the command cards coming into play, fuller combat rules, etc. It was actually somewhat hard to follow. This may be because I’m out of practice with wargames.

Another possible factor is the way the rules are presented. First off, the game way overuses bold type. There are paragraphs where it feels like every other word is bolded, often for seemingly no purpose. There was one paragraph where the word “battlefield” was bolded. Why? It’s like reading a pre-owned college text where someone else has gone wild with a highlighter — often for what seems like bizarre reasons. Similarly, some of the graphical design could be clearer. For example, units’ attack values are rated as [icon of a sword] (X) Y/Z. X is something like accuracy; Y is something like chance of armor penetration; and Z is damage after penetration. But they’re all just presented as a string of numbers in a row. I got more used to reading these combat stats as I played, but it’s still pretty easy to get confused.

Also, the game’s writing is often unclear. The rules will frequently define something in a way that makes it unclear whether it’s an “ought” or an “is”. The way the Final Rush rules are presented, for example, make it unclear whether units can do a Final Rush, or must do a Final Rush. There’s a section that carefully defines indirect fire, but then apparently gives no mechanical difference for how indirect fire works. And there’s no index in the supplied rulebook, so it’s hard to find where a given rule is mentioned for the first time. (There is an index for the online advanced rules, but that’s then the advanced rules.) I also think there are too many modifiers to keep track of: terrain, morale, facing, range, etc. etc. all get factored in with + or – modifiers, which can lead to a little too much on-the-fly arithmetic for my tastes.

The game is definitely problematic from a diversity perspective. The rules assume masculinity as the default in a bad way, for a start; they always use “he” or “his” to refer to players, and say “bowmen” where the perfectly gender-neutral “archers” could work instead. Why call the one faction the “Men of Hawkwood”? Also, their illustration of the Dark Elf “lashmistress” is pointless titillation.

There may be some racism in there, too. The orc army in Battleground may be an example of the “evil races” stereotype, though I’m not sure about that. (Do the Crazed Goblins make this worse? Again, I don’t know.) And the Umenzi Tribesmen faction may or may not play into racist tropes. I haven’t bought it, because to be honest I’m afraid of discovering after the fact that it’s drenched in troglodytic ideology. I’d definitely welcome reports on that front.

Aside from those problems, Battleground is very fun. I played out an entire solo moderate-sized wargame conflict in about half an hour, which is something not a lot of games can do. The flavor of the command cards — choosing which unit’s orders to change, deciding whether to try for a new command card or not, etc. — is quite fun. There’s lots of drama in the dice, but doesn’t feel like the game relies too much on luck. It feels like the die rolls mean something. “Ooh, they get hit, but their armor absorbs it!” or “Ah, those wily elves dodge the goblin onslaught!” The combination of command cards, special abilities, etc. gives a good feel of character to the armies: the elves gallantly holding their ground, the goblins charging forward with a “waaarrggh!”, etc. Rout tests, troops lost to enemy attacks, etc. all add to the sense of drama.

Mostly, it’s just neat how you can put an entire miniatures-like wargame in a small pouch.