In these scenarios, the PCs must find just the right bureaucrat to give them the MacGuffin they need (an exit visa, permission to export something, lifting a court injunction, whatever). They start with one bureaucrat who, given proper plying, will refer them to another one, or perhaps to more than one. Most bureaucrats they encounter, true to form, are unable to help and have only a sense that the correct person isn’t them. Navigating the system, the PCs eventually, hopefully, find the bureaucrat who actually has what they need. And through good use of interpersonal skills, they manage to secure the MacGuffin. It’s basically like a Choose Your Own Adventure book, except most of the endings are bureaucratic dead-ends, and there’s a slim space for application of skill. 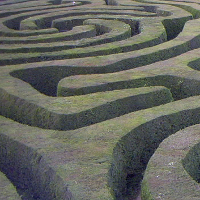 I’ve never actually run or played in one of these scenarios. To be honest, this kind of scenario reminds me (naturally enough) of mazes I used to draw when I was designing dungeons for D&D. Mazes look really fun on paper, but it’s hard to imagine them actually being fun in play:

With bureaucrats, it might allow for a tiny bit of roleplaying, so it’s not as bad as all that. The Traveller Book specifically recommends avoiding a purely mechanistic approach, and to aim for as much roleplaying as possible.

But really, is there anything more deprotagonizing and demoralizing than having to navigate a bureaucracy? Even if the PCs get to use their skills to convince bureaucrats to be helpful, or browbeat an official into giving them information they need, it’d be all too easily turn into a series of skill rolls. And it seems that these scenarios often start with the premise of the PCs trying to get out from under a bureaucratic boot, rather than actually trying to get ahead. Not especially fun in my book.

I’m curious: have you ever played through one of these adventures? Does the reality at all match my perception of what it’d be like to play? What did you enjoy about playing them?