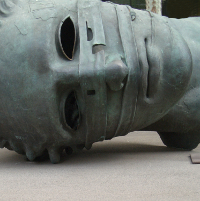 I don’t think I’ve ever met a healing system that I like. My ideal healing rules would need to perfectly balance a bunch of factors:

That makes it hard to come up with a really good set of healing rules. The rules in B&C are okay, but I’ve never been especially enamored of them — they’re the sub-system I’d most likely change if I brought out a second edition.

But that’s what blogs are for! Here’s a simplified healing system that I’ve been toying with:

Once per week, you heal a total number of points equal to 1 + the Physician skill of whomever is attending you.

That’s basically it! Some specific considerations:

There’s no die rolling involved here, and for some players, that might mean a loss of agency. (Some people want to roll dice every chance they get, even if it means potential harm to their character!) But hopefully that’s balanced by the choice of where to allocate the points.

If you want a grittier system, make it “per month” instead.

As always, I’m interested to hear how this works if you put it into play!

Edit: After trying this a bit in play, I realized that this rule over-exaggerates the importance of Physician skill. I’ve written up some further thoughts about quick and easy healing rules for B&C.