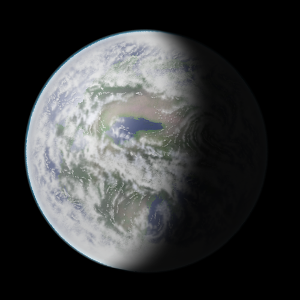 The Veil is the Morensian name for the main moon of Calteir. It is the most prominent astronomical feature of Calteir, besides perhaps the Sun and Calteir itself.

The Veil is usually pure white. Keen eyes can sometimes detect whorls and trails in the whiteness. Occasionally, and unpredictably, the whiteness clears and shapes are revealed. The shapes are unclear, but there are sometimes blue and green areas, sometimes a vast orangey-brown pall. A common type of prophecy is based on this.

A common belief in Morensia is that there is a woman hidden behind the white, and that the whiteness is her wedding veil. For this reason, some people call the moon the Bride. There are different myths as to who exactly she is to marry. Her face is almost never very clear, but there are parts that seem to suggest eyes.

In Sashtia, the moon is considered to be a manifestation of Zarai.

Unknown to almost all residents of Calteir, the Veil is inhabited. By who or what, though, remains a mystery to even the wiliest of Calteirans.