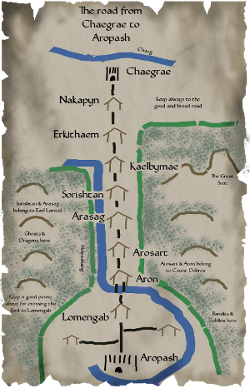 A pilgrim’s map of the Arothaem Road

The Arothaem (Old Morensian ‘Road of Aros’) Road is located in the Kreshar region of Morensia. It runs from Aropash, at its southern terminus, to Chaegrae at its north.

The Arothaem is the only Rhodian road in Morensia. As such, it is quite good and mostly paved with stones, except where people have taken the stones to use in their buildings.

Popular history has it that Aros built the road in one night, when a surly mountain god challenged him to a foot race. Rather than ruin his new boots (freshly made from troll-hide) on the uneven ground, he paved his path and then proceeded to beat the mountain god easily.

Although both Chaegrae and Aropash have good stone bridges, the Road strictly speaking doesn’t extend to those bridges, so the Road itself only crosses water once: at the ford between Lomengab and Aron. The political atmosphere at the ford is usually rather tense, lying as it does between the demesnes of Earl Loroud and Count Dobros. Numerous bearers work there, carrying people and cargo back and forth. Both Bailiff Lothtol of Lomengab and Baroness Sermae of Aron agree that bearers should not threaten passengers with ‘loss’ or ‘tripping’ mid-stream, but it still occurs pretty frequently. Tolls are higher when going to the west, but neither side is exactly cheap.

As with many roads in Morensia, the road is plagued by bandits, many of them holdovers from the Interregnum. Perhaps the most famous is Uraen the Red.