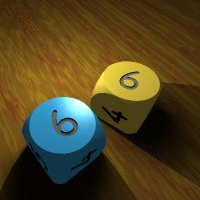 The header image for Roll 2d6

One of my favorite podcasts of all time is Roll 2d6. Or, to give its fuller title, “Roll 2d6, a Podcast about Games, Gaming and Gamers, with Adam and Nate.” (Note that that website is currently dead; I’ll explain more below.)

Roll 2d6 has had 23 episodes (that I know of) so far. They deal with all sorts of tabletop gaming. They’ve covered Car Wars, gaming at cons, Dwarven Forge resin scenery, D&D, Champions, Runebound, gaming setups, Star Trek miniatures games, computer mapping software, playing miniatures wargames with plastic soldiers, and lots more. A lot of the topics are very dear to my heart. I think their episodes that deal with gaming on the cheap have inspired a lot of my own desire to find low-cost gaming options.

And even when they’re talking about games that I’m not personally interested in, their sheer enthusiasm and friendliness make the show extremely enjoyable. The show is very well-produced, with good sound quality and great writing. Adam and Nate seem like a couple of nice guys you’d easily want to have join your gaming group, regardless of what you’re currently playing. (But especially if it’s a Star Trek game.) They’re sometimes downright hilarious, like when they riff on the Ultimate Gaming Table (The Ultimate Gaming Table? The Ultimate Gaming Table? No, The Ultimate Gaming Table!) and how fun it would be to have trained hamsters who run messages back and forth. Adam and Nate’s enthusiasm is very infectious. In at least one case, they’ve actually convinced me to get into a game. (More on that in a later post.) For sheer fun value, listening to them talk about games comes close to actually playing games.

Shut Up & Sit Down owe them a debt, at least in spirit if not in actual inspiration. “Two guys talking about all sorts of tabletop games with great, funny writing, honest reviews and genuine enthusiasm” describes both shows quite well.

In recent years, they’ve posted less and less frequently. Most of their recent output has been semi-annual reviews of what they played at KublaCon. Still worth listening to.

In even more recent years, they actually lost the domain “roll2d6.com”, and both apparently got very busy with Real Life. (Edit: As Adam very gently corrects below, they didn’t lose the domain; it just isn’t working as it used to.) It sounds unlikely that they’ll restart the podcast, but who knows? A couple months ago, in a spate of re-listening to their podcasts, I wrote to the Roll2d6 email address on the chance that they’re still around. Adam wrote back with his usual kind enthusiasm and said he “still has inklings to start it up again sometime.” So I’m not giving up hope.

If you’d like to listen to the Roll2d6 podcast, Archive.org still has a quite good set of snapshots of their website, including the podcast downloads.