I didn’t do much actual gaming at Convergence this year, but what I did was good.

Thursday night, I played a little Zar. Usually pretty fun, and this was no exception. No idea who won, but that’s rarely the point.

While I’m on the topic, please check out the Kickstarter for Buzz, a Zar/Uno-like game. I got to playtest it and I can vouch that it’s lots of fun.

My big dose of gaming was Saturday afternoon, when John ran his Tekumel game. This was lots of fun!

The time slot we’d worked out was very narrow — only two hours, from 3 to 5. And I think I arrived a few minutes late and had to leave a few minutes early, so it was even more compressed than that. But we made it work!

John started with a brief intro. We were all recent trial recruits to a Tsolyani legion, sent on a mission to test our worthiness. John gave a short intro the city we started in, Thráya: it’s located upriver from Jakalla, and it has a lot of river trade.

Then we collaboratively decided on a scenario. River trade suggested pirates. Perhaps some ex-recruits from the legion had taken to piracy? Or poor fisher-folk? Or someone else? We left the specifics up to John, but came up with a nice little scenario of pirate-pacifying. I have to note, this worked well. John trusted us to come up with some good ideas for a workable two-hour scenario, and I think we did. Different theories on how it might go gave flexibility. Most importantly, it got us making important decisions almost immediately — something that not enough games run at cons do.

Character creation was kind of simultaneous with the scenario creation. We had a grizzled old archery instructor (the “assistant to the assistant”, I think he was) as our leader; a mage, equipped with some pretty powerful spells; and my character, a stocky spearwoman whose tactics tended to be limited to “barge on in”. The three of us headed down-river, doing a tiny amount of investigating along the way.

Then we were at the island where the pirates (probably) were headquartered. We landed, my character noisily worked her way through some reeds, we found (and destroyed) some hidden pirate boats, and then a bunch of pirates attacked us.

We all got to contribute to the combat, but the mage had by far the most effective spell. He summoned up an illusory lizard monster (a feshenga?) that attacked the pirate-villagers. In Tekumel, if you believe the attack is real, you suffer real damage. So the pirates went down in droves. A very powerful spell!

In the end, we’d quelled the pirates and, I think, got ourselves admission to the legion. And we stayed far away from the teqeqmu (?) hiding in the forest.

The game basically consisted of a tiny bit of travel and investigation followed by one combat, but it worked very well. The collaborative scenario design was fun and useful, and we all got to contribute and get our moments in the spotlight. And we actually went all the way from character creation to finishing a scenario in less than two hours. Quite an accomplishment!

Sunday morning was my last attempt at gaming. “Attempt”, because I wasn’t successful. I was danged impressed, though!

Last year, I played Artemis at the Royal Manticoran Navy room. They apparently had a lot of success with it, because this year they had a whole dedicated room for Artemis on the 22nd floor. And they went all out.

I didn’t try to get photos of the whole room, because photos wouldn’t be able to do it justice. It was amazing. They’d set up what looked like a full starship bridge, with the captain sitting in the middle of an elevated platform, with a a full-on Enterprise-appropriate captain’s chair, looking at a giant viewscreen; crew stations along the sides; and diamond plate wall coverings, and I-beam supports… It was pretty spectacular.

Investigating closer, I discovered that they even created dedicated control panels for each crew station. No fumbling with a keyboard or tablet, these stations have specific buttons for each of the things you’d want to do at your crew station. Wow. 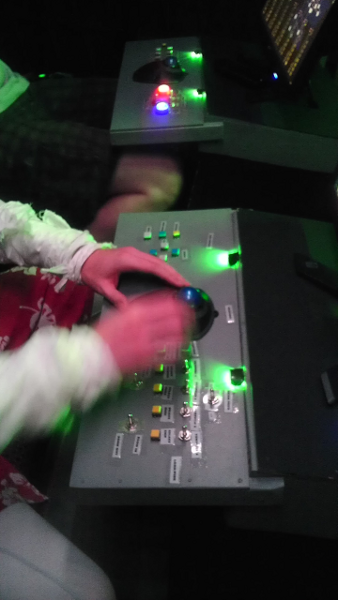 I wasn’t the only person who noticed that how much the RMN folks had done with the Artemis room. The sign-up list filled up quickly, with only standby slots available. So in the end, I didn’t get to play it. But just seeing the amazing artistry and skill on display in that room was almost enough. And it’s also neat to know that more people are discovering how cool Artemis can be.

So, all in all, this year’s Convergence wasn’t filled with gaming, but what there was, was great.