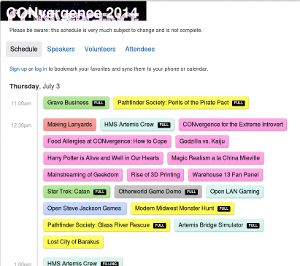 It was, very interestingly, slightly smaller than last year’s. This may have been due to the loss of the Sofitel for this year, or because people are staying away due to crowding, or whatever else. Regardless, it was interesting. I didn’t feel jostled walking down the hall, and I didn’t get hit by a wall of heat entering large programming rooms. It was easy to bump into people I know (although texting was still a necessity to really plan anything).

Still, the lack of programming space due to the Sofitel not being available meant that there was less programming going on. There were occasionally slots where nothing in particular interested me. And there were only a handful of gaming panels. (I’ve heard similar complaints about other kinds of programming, so it sounds like Convergence handled the cut in programming very equitably.) I hope that getting the Sofitel (or whatever it’s going to be called) back next year will allow for more programming while not bringing back the hot, uncomfortable crowds of 2013.

Convergence is doing better with moderators. There is still a long way to go, but it’s definitely improving.

It looks like the Sched webpage and app is working really well for gaming purposes. In previous years, RPGs usually seemed to be hit or miss; the paper sign-up forms, only available at the con, made it hard for information to travel fast enough to actually arrange things. There would often be people (including me) wandering the 22nd floor, looking for but not finding games. But this year, I think most of the gaming tables were occupied most of the time. The ability to sign up ahead of time, and digitally, seems to mean that events are that much more likely to successfully occur. I may have to start running games at Convergence!

I left a large amount of feedback for Convergence on their survey webpage, some of it bad, some of it good, some of it otherwise. Hopefully pretty balanced, and hopefully all constructive. Convergence is like a small town, both in size and in complexity, so of course there are bad and good things. It continues to be fun, and worth going to.

And speaking of going, I’m off again for about a week. See you toward the end of the month.