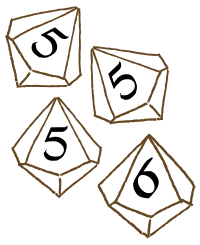 In my multi-year Blade & Crown campaign, a weird thing happened a couple sessions ago. A player rolled some dice. They then decided to use a Trait. Adding the Trait caused their roll to go down!

How did that happen? I don’t remember the exact rolls involved, but I think it went something like this: Their roll started with three 5s, totalling 7. Even with the modifier for an evocative and original description, they’d only get up to a Stalemate, so they decided to use a Trait. That contributed one more die, on which they rolled a 6. Suddenly, the highest result was a 6 — not higher than the total for the previous dice, but still the highest single result. So adding their Trait actually reduced their overall result. Weird!

How to deal with this? Personally, I think it’s rare enough (once out of hundreds of rolls, so far) that it isn’t really statistically important. But if you want a rule for it, I suggest one of the following:

Using a Trait cannot cause your roll to go down.

In the event that the bonus for multiple dice conflicts with the single highest result, always take the higher possible result.