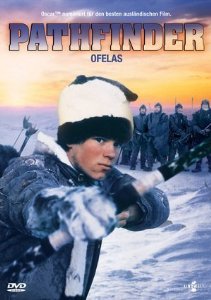 Having had it recommended to me many times, I finally watched the movie Ofelas (Pathfinder) recently. It lives up to the reviews; what a good find!

It’s set in northern Scandinavia, in the land of the Sami people (sometimes incorrectly called “Lapps”). The story is apparently very old; according to the movie, it dates back 1000 years. It’s very much a swords, bows and knives kind of tale.

I knew almost nothing about the plot in advance, and I didn’t recognize any of the performers. The story is very straightforward, but not predictable. For those reasons, I found Ofelas very compelling; I was able to immerse myself in it without being distracted by Famous Actor’s quirks or by knowing that scene X or Y was coming up soon.

What is the plot? Well, I want to keep it surprising and compelling for you, too, so I won’t spoil it by saying too much. Suffice to say, a young man, Aigin, returns from hunting to find his family killed by some nefarious Tchudes. (The Tchudes are thoroughly evil. I won’t spoil it, but there are some great scenes depicting their ruthlessness. And the filmmakers apparently decided to make sure their Tchudes didn’t resemble any real ethnic group, so they had them speak a nonexistent language. I wonder if a conlang was involved?) Aigin treks back to a nearby village to get help, which causes a rift among the villagers: should they help him, or flee the marauders who Aigin has undoubtedly led right to them?

Ofelas has tons of inspiration for gaming:

The village’s shaman is a great character. There are many touches that make his magic seem mysterious, powerful and rare — very inspirational for gaming, where that is just how I like my esoteric powers to be. And the actor does a great job of filling the character with penetrating wisdom and charisma.

The movie is very male-centric; women are mostly around to provide motivation for the men. But the alertness of the main female character, Sahve, proves crucial in one scene.

All in all, a pretty great movie. Definitely one to watch if you’re looking for ideas for a snowy fantasy game.