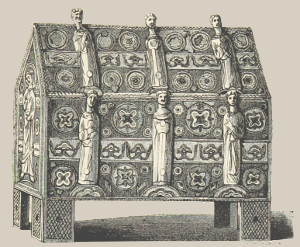 This reliquary is quite heavy and of fairly large size (about Bulk 9), made from a very light-colored but dense material — perhaps ivory or an unusual wood. It is covered with reliefs of major Avatars and exquisite scrollwork. Several of the designs have tiny rubies or amethysts worked into them. Many of the Avatars’ eyes are tiny emeralds, though about half have fallen out.