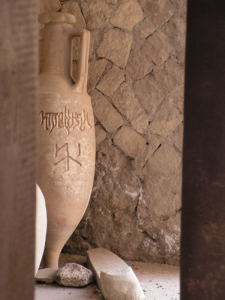 This is an amphora, like many used for shipping food, oil or other commodities. There are only two things that distinguish it from a thousand other amphorae:

There is no apparent way into the amphora without smashing it or breaking the stopper. It is quite heavy — bulk 9 or so — and when moved, it doesn’t slosh or shift; whatever’s inside it is pretty solid.