With a recent comment on my post about the Little Tin Soldier, I was curious what else I could find about Don Valentine on the net. With the exact search terms “Don Valentine” and “Little Tin Soldier”, Google returns just one hit: a scanned newspaper article from 1984. It’s from the Charleston, SC News and Courier — an odd place for an article mentioning a Minneapolis FLGS. But I note that the article was syndicated by Knight News Service, which apparently at one time owned the St. Paul Pioneer Press. So I’d guess the article was originally published in that local paper, then syndicated on from there.

Here is the main part of the article, with the relevant paragraphs highlighted: 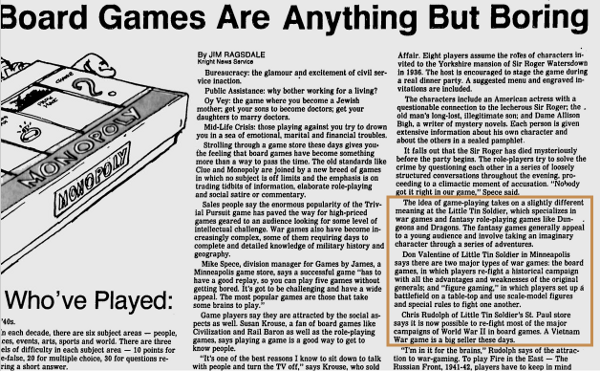 And here’s the relevant text in a more readable form:

The idea of game-playing takes on a slightly different meaning at the Little Tin Soldier, which specializes in war games and fantasy role-playing games like Dungeons and Dragons. The fantasy games generally appeal to a young audience and involve taking an imaginary character through a series of adventures.

Don Valentine of Little Tin Soldier in Minneapolis says there are two major types of war games: the board games, in which players re-fight a historical campaign with all the advantages and weaknesses of the original generals; and “figure gaming”, in which players set up a battlefield on a table-top and use scale-model figures and special rules to fight one another.

Chris Rudolph of Little Tin Soldier’s St. Paul store says it is now possible to re-fight most of the major campaigns of World War II in board games. A Vietnam War game is a big seller these days.

Those paragraphs are interesting for several reasons. First, it mentions the St. Paul branch of the store. I had almost entirely forgotten that the Tin had a St. Paul location until that recent comment. Also, that confirms to me that the story derived from the St. Paul newspaper, as a Minneapolis paper probably wouldn’t bother interviewing someone from the St. Paul branch. And last, it seems to deemphasize RPGs at the expense of board games. Was the RPG boom already over by 1984? Or had it never gotten that big in South Carolina? Or something else?