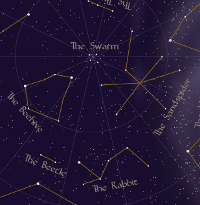 A few weeks ago, I was in a place where the night sky is truly amazing — at least when the clouds don’t impinge. The Milky Way is just right there, the Pleiades are big and beautiful, some of the globular clusters and galaxies are naked-eye objects, the entire sky is full of stars. It’s always wonderful to be reminded of what a beautiful universe we live in. And it reminds me of how interesting it can be to consider astronomy when you’re building worlds.

And I suspect that there’s another category, just about as large, where the astronomy differs in a few standard ways: there are two moons, there are two suns, etc. With a lot of these, the astronomical differences still don’t mean much — they’re reminders that this isn’t Earth, but they don’t have much practical effect otherwise.

What ways are there of creating variant astronomy with interesting, unusual effects?

Well, before I get further into this, I should make it clear that I don’t think everyone needs to detail the astronomy of every conworld in some original way. Sometimes, standard tropes are standard for a reason: they work, they signal things in a simple way and they are evocative without requiring infinite work. And even if you want astronomy to come into it somewhere, it can be something the group devises after play has begun, perhaps left fallow for a useful, dramatic moment.

And I should also say that I’m going to stick to relatively plausible variations here. Could the night sky be full of rainbows and exploding candies? Well, yes, but if I start listing the more far-out variations, I’ll never stop.

Next time, a bit about some of the effects astronomy can be used for in gaming.