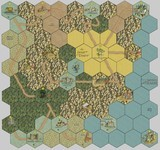 Note to self: print, mount and cut out this board variant.

Lately, I’ve been thinking about Search for the Emperor’s Treasure, and last Saturday night, I played it with a few folks. I’ve been hankering for it since I looked into Gaming Hoopla, and since Matt mentioned wanting to play it. Saturday’s game turned out to be the deadliest session of SftET I’ve ever played.

I’ve seen characters die in SftET before, but never twice for the same player! That was kind of amazing. At BGG, folks mention a rules variant where you can heal 2 points by doing nothing at a named location; that sounds like a good idea, and I will try it next time I play.

Also, we tried a rules variant I’ve been wanting to try: any time you end a turn in the same numbered location twice or more in a row, you must pay an item (Arms or Treasure) as a residence tax. This is to prevent players from going to (primarily) the Walled City and just camping there to collect treasure. I thought it’d keep people moving.

What actually happened was this: several of us kept losing items as we moved from place to place. Having to pay the tax made it hard to either meditate or heal, so things got kind of desperate. This may have been what made the game so deadly. We stopped the game after a few hours, not having found enough Imperial Treasures to end it. By the stop of play, some of us had lost multiple items to taxes (I’d lost two treasures, I believe!), and several of us were hanging on by a few hit points.

The session certainly didn’t dim my enthusiasm for the game, though it did convince me that this rule variant needs work. Perhaps the tax should only apply when you get treasure twice in a row in a single location? Or maybe I should just modify the encounter table so that there are no locations with more than one treasure result.