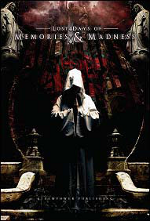 Saturday morning started nice and early with Lost Days of Memories and Madness, aka the Elf Memory Game. Eric facilitated this (it doesn’t have a traditional GM, though he knows the game best, so he was teaching us).

The group of players was pretty well suited to this game; we came up with a great bunch of initial memories, ranging from the romantically beautiful to the deliciously twisted. Kingship changed three times during the game, which I haven’t seen before, and one character (Chad’s) was actually driven mad, which again I haven’t seen happen in the game before. I didn’t get down the whole plot, but the elements around which the game revolved included:

There was a lot of interesting character development, and some nail-biting dice rolling where it all came down to an extra die here or there. There were several great quotes:

It was a very interesting game from a representation and identity standpoint as well. There was one character who was differently abled due to a wound caused by one of the other characters (we were never entirely sure whom, due to the way memory works in the game). This character rode about in a succession of amazing ways, from a palanquin to a howdah.

The same player seemed to be frequently confused by the gender in the game. Due to the fluid nature of memories in the game, characters frequently found themselves remembering what it was like to be someone’s lover in multiple genders. Many of the PCs seemed to have some sort of trans history, and family relationships were highly complex. In fact, there was one character whose relationship to my PC simply confused me throughout the game, and I played this in character. But rather than embracing the complexity, this one player continually wanted to clarify the genders of all concerned in the Moylan love tesseract. At one point, I considered just getting a timeout to ask her to be less uptight about gender, but it never got quite bad enough for that.

All these shifting histories made this Elf Memory Game one about identity, and about how memory shapes identity. I hadn’t realized this aspect of the game before, or at least it hadn’t been brought home so thoroughly to me before. The game could be quite an interesting place to actively, intentionally explore what identity is — at least, what identity is when memories can be commodities.

It also showed me the difficulty of running a backstabby game when you don’t already know everyone at the table. I am fairly certain that putting “Mature players only” in your game description attracts just as much people who shouldn’t be in the game as it discourages. And it’s hard to feel comfortable enough with strangers to run a vicious, political game. (I remember one disastrous Paranoia game at Con of the North a few years where the GM was poorly prepared and none of us players knew each other… yuck.) But I think that here, we were lucky to have a group of people who mostly got what the game is about, and who were able to work together to create in-game viciousness matched with out-of-game harmony.